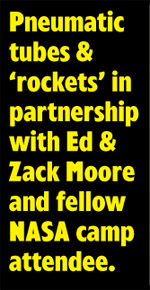 Chad Rabinovitz, who for the past six years was the Producing Artistic Director of the Adirondack Theatre Festival, is about to “launch” an interactive candy store at French Mountain Commons, in the outlet stores north of Northway Exit 20.

“No one has ever done this before, a space-themed candy store,” he says.

Most everything in the store is launch-able. “If it fits, it flies,” Mr. Rabinovitz says.

“What we are creating is a Disney experience. Fill your space pouch, launch it, and you leave with a certified space-flown product,” he says. “You will remember this store. It’ll be the one thing people will say, ‘I have to come back for this.’”

Customers will stuff their candy, toys and other themed merchandise into little “rockets” and activate a complex candy-themed interactive “launch pad” (choose your fuel: Fudge or Peanut Butter). After a NASA-style countdown, it blasts off.

“Fwoop!” Mr. Rabinovitz says, as he describes the route the lighted vessel will travel across a fiber-optic starlit ceiling through a clear pneumatic tube, back to “touch down” at the register, where the purchase will be “space certified” — with a sticker if you’ve selected a “Moon Mission,” or wings if you choose a trip to Mars.

Zack Moore had stopped by Monday to help with preparations when The Chronicle was there.

He says, “After ATF, I told Chad I didn’t want him to leave. Let’s start a business together.”

Mr. Rabinovitz says he told Mr. Moore, “Before I even got into theater, my dream has always been to open a candy store.”

“I’m a rarity,” he says, “a business minded artist. I love creating things. My degrees are in theater and business.”

Mr. Moore says, “We love our Tommy Hilfiger and Gap stores, but we also want to offer families an exciting experience that can’t be Amazoned. As retail is evolving, we still have a lot of traffic but you want to have a varied experience, so people come back.”

“We want to have a strong local following, and build a national brand,” Mr. Rabinovitz says. “I knew I could open a store here, stay engaged and have a reason to come back. I want to create a solid business here and then build this into a national franchise, with the original store always in Lake George.”

He believes it’s the ideal time. “We are on the cusp of the next great space age,” he says. “We’re future-proofing ourselves.”

“Look,” says Mr. Rabinovitz. “If you just want candy there’s CVS or Stewart’s. This is about more than just a retail store. We are changing the game in retail.”

The goal is a soft opening Thursday, July 1, and a grand opening the next week.

Glens Falls firms are much involved. Logo and signs were created by Will Fowler at SideKick Creative, and printed by M&M Digital Graphics. Mannix Marketing is helping with promotions. Emily Murphy, also Executive Director of the Wood Theater, is doing the social media.

Mr. Rabinovitz is one of triplets. He says his brother is a marketing vice president for Hershey, overseeing the health-conscious “Better For You” candy brand that the store will sell; his sister does marketing for Disney; and they have pitched in too.

The space was still very much a work in progress on Monday. A small crew from New Jersey was installing the custom-designed pneumatic tube system created by a company in Texas.

Staff from the Moores’ outlets and their Queensbury Hotel property, as well as former ATF-connected contractors were building out the displays and showroom.

“I’ve put all the things and the people I know into making this a completely unique experience,” says Mr. Rabinovitz.

Shaped gummies are Mr. Rabinvitz’s favorites, he said. Variations abound in the storeroom.

There were stickers, plush toys, candyprinted socks, oversized Kit Kats and Tootsie Pops, Moon Pies in 10 flavors and several sizes, astronaut-shaped purses, jars of Bazooka gum and barrels of Cheez Balls, 180 kinds of small candies to be sold by the pound from bulk bins, and more than a dozen salt water taffy flavors targeted for a standing rocket ship display. 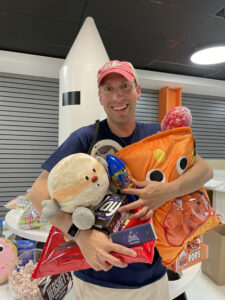 It adds up to more than 1,100 products, Mr. Rabinovitz says. He’s hoping to hit 1,200. “It’s all kinds of candy, not just about space,” he adds. He says he’s mindful of offering girl-themed space items, too.

Displays will be on theme: “Capture an Alien” for stuffed animals, “International Space Station” sweets from around the world, “Chocolate Nebula,” “Rocket Fuel” flavored sodas. They’ll sell “Candy Flights” of pre-packaged gift boxes in the store and online for mail-order —“Blast from the Past” vintage sweets or “You’re Out of This World” thank you candies, for example.

Quoting his signature Adirondack Theatre Festival sign-off, Mr. Rabinovitz offers, in stage voice, “What you see here, you can’t see anywhere else in the world.”

He expands: “I mean, anywhere else in the universe! It’s only Right! Here! At The Candy Space!”

Mr. Rabinovitz also continues theatre projects. He says he left ATF to focus on a multi-million dollar multi-media merger at his other theatrical company, Bloomington Playwrights Project in Indianapolis.

With his friend Mr. Small, he also started Two Astronauts, an interactive events company based on the “In the Box” shows he ran last year as a substitute for the ATF season that was closed due to Covid.

Mr. Small was a high school intern at Westport Theater in Connecticut when Mr. Rabinovitz worked there.

This week, he and Mr. Small attend the National Sweets and Snacks Convention put on by the National Confectioners Association in Indianapolis.

It was also Mr. Small who brought the Super Bowl weekend “Puppy Bowl” to the Cool Arena in Glens Falls last winter.

“We’re not just three people opening a candy store,” Mr. Rabinovitz says. “We all want to make Glens Falls a better place to live.” He said, “We’ve all invested financially,” although the Moores put up the most.

They expect to hire four employees: A “flight director” manager, and three “flight crew.” Mr. Rabinovitz says he will be in Glens Falls through the summer to oversee the new store, which is tucked into the back corner of French Mountain Commons.