Chronicle Managing Editor Cathy DeDe writes: The Glens Falls Planning Board will conduct a public hearing on Tuesday, Aug. 2, at 4:45 p.m. at City Hall on several matters including Saratoga Springs developer Sonny Bonacio’s plans for South and Elm Street. The meetings will also be streamed live on YouTube. See CityofGlensFalls.com for links.

On the agenda is a Site Plan Review for Mr. Bonacio’s SpringCity Development Group — listed here as owners of 31, 41, and 45 South Street and 31 and 36 Elm Street.

Bonacio right now owns only the former Sandy’s Clam Bar Building at 41 South, but the city plans to sell the other properties to them.

The project went before the board last month but was tabled, pending additional information to be accepted as a “complete application.”

Mostly what was sought was details such as snow removal plans.

SpringCity’s request for a parking variance — to utilize 75 spaces in the Travelers building parking garage to comply with requirement per tenant — was largely accepted by Planning Board members.

SpringCity seeks a waiver from the rule requiring parking be within 300 feet, instead locating it 700 or 900 feet away, depending on the route traveled. 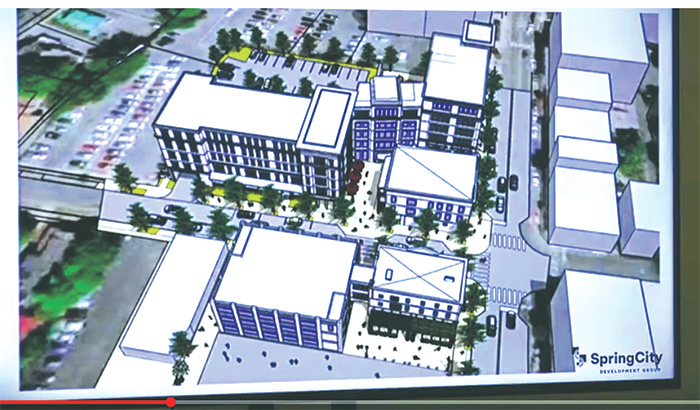 On the far left, a tunnel through the building will serve as parking entry.

Along Elm Street: Brownstone-style apartments will have direct street entry.

On top, the fifth floor will be set back and painted a different color, to create the illusion of a less imposing, four-story building, they said.

Center of this image: The angled facade is a ‘vertical circulation center,’ with elevator, stairs and “some visual elements” that will be the main entry for most residents as it connects the two new buildings in the current Farmers’ Market lot, facing Elm (far left) and South Street (top).

Pedestrian-friendly walkways are planned around the former Sandy’s building at the corner of Elm and South Street, feeding south into the planned Market Center space (not pictured here) via a crosswalk across Elm and under a second-story enclosed ‘bridge’ that connects Hotshots and the Incubator building. Cathy DeDe, with visual from a YouTube Screen Shot.