My journalist friend Bob Conner has written his first novel, The Last Circle of Ulysses Grant, about the life and last days of Ulysses S. Grant. I bought it last fall at our Chronicle Book Fair, and I’m writing now at long last to tell you it’s a really good, really informative read.

It’s also what propelled me to Mount McGregor last Sunday (see page 35) to revisit the cottage where Grant spent his last five weeks of life, finished writing the second volume of his now treasured memoir and died on July 23, 1885.

Bob’s novel imagines what people were saying and thinking and doing during those days, weeks and months. 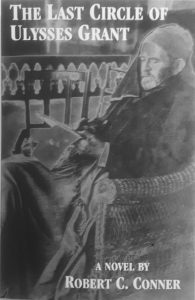 The book took several chapters to hook me, but from then on I found it extremely well written and researched, interesting and entertaining. More than once I found myself marveling at all this guy knows — about the Civil War, about American history generally, about world history, about how people live, lived, fought and got along.

Bob brings to life not just Grant, but his wife Julia and their daughter Nellie, who returns from England in part to care for her beloved father but also in part as respite from a very bad marriage.

The cast of active, speaking characters includes the famous — people like Grant’s publisher Samuel Clemens and General William Tecumseh Sherman — and many others who are real but I wasn’t aware of, and who were important and sometimes compelling figures in their own right.

A Seneca Indian named Ely Parker was a major person in American government notwithstanding raw prejudice.

There are dinner conversations in the book where the talk involves themes so modern — racial discrimination, women’s rights, economic exploitation, socialism — that the thought crossed my mind that Bob was imposing it on them (and us). Even some sexual practice is alluded to.

But I hesitate to doubt much, because Bob’s knowledge is so encyclopedic and his dedication to research so apparent that my hunch was that if I challenged him on any particular point, he would access some actual document that he borrowed the exact wording from!

The book is particularly good at establishing aspects of Grant’s personality — first and always, his decency.

But Bob also does a fine job of developing Grant’s process as a writer. At first, he’s tentative, but then he gains comfort and confidence. He’s assisted by an aide named Badeau, who ultimately decides to pull a power play that is remarkably in tune with today.

Grant’s reaction — his defiance — is a dramatic highlight of the novel. He may be dying, but he’s not weak.

The Last Circle of Ulysses Grant is published by Square Circle Press. It’s a 300-page paperback.

Bob lives in the Saratoga County Town of Malta, and he blogs at robbertcconnerauthor.blogspot.com.

His post on June 18 enthused about U.S. Senator Chuck Schumer’s visit last month to Mount McGregor. “He pledged to press for the site’s designation as a National Historic Landmark, making it potentially eligible for federal funding,” Bob writes.

I think Bob’s novel itself helps McGregor’s cause.