David Britton of GF is chef at Siro’s, Saratoga

Glens Falls’s David Britton is the new executive chef at Siro’s Restaurant, a centerpiece of the Saratoga Race Course season.

As reported by Steve Barnes in the Albany Times Union, Siro’s was sold last week to SPS and JLS Family Partnerships, which two years ago purchased Shepard’s Cove Restaurant and turned it into the Lake George Beach Club in Lake George Village.

Mr. Britton tells The Chronicle the Siro’s hire was fast and unexpected.

“Friday they sent me a note, do you want the job? I said, I think it’s appropriate that I should have an interview first, so I went down on Saturday morning to talk with them. We met at the Race Course, in a quiet, air-conditioned room. It didn’t take long. I already knew I wanted it.” 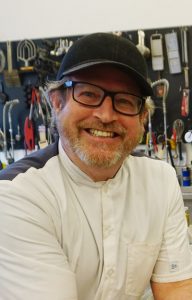 He said he was to meet his new kitchen crew on Tuesday, July 9, at 10 a.m. “It’ll be my first day in the kitchen, and we open the next day with an all new menu.”

Wednesday was to be the annual pre-season “Siro’s Cup” party, honoring jockey/brothers Irad and Jose Ortiz and benefiting the Center for Disability.

He said that as of Tuesday, there were already 1,500 reservations for the event.

Tonight, Thursday, the track’s opening day, is the first night of regular service.

Mr. Britton said he’s designed a new menu. “I can’t duplicate what they did before. I can pay homage to and respect it. I’m bringing in dishes from (prior restaurants he worked) Springwater Bistro, Trillium (at the Sagamore Resort) and when I was in Hawaii. My first order was 150 pounds of Hawaiian fish.”

He said he’ll incorporate products from his Dakine Cuisine line of agrodolce distilled vinegar syrups and other products.

Mr. Britton said he will still run his Pies on Wheels wood-fired pizza truck and catering business, with continued help from his wife Christine and their two sons.

He was a co-creator of DownTown City Tavern in Glens Falls with its owner Craig Merrell.