Home » Hot Copy » Are lockers becoming thing of the past at Qby. High?

Are lockers becoming thing of the past at Qby. High?

So few Queenbury High School students still have a hall locker that many lockers are being eliminated in the school’s current renovation, leaving wider hallways.

“Our Legacy 2020 Capital Project forced us to look at space with a critical eye, and the architec

ts and engineers asked us for a count on how many students used lockers.

“So we did a Google survey, and what we found was the students like the idea that lockers exist, but they are not using them.”

Only 60 of the 1,150 high school students said they were using lockers.

Many rows have been removed, although some remain, “just in case,” Mr. Switzer said.

“We’re designing for the future, and we have to have a flexible learning environment. We want to be ready for anything.” 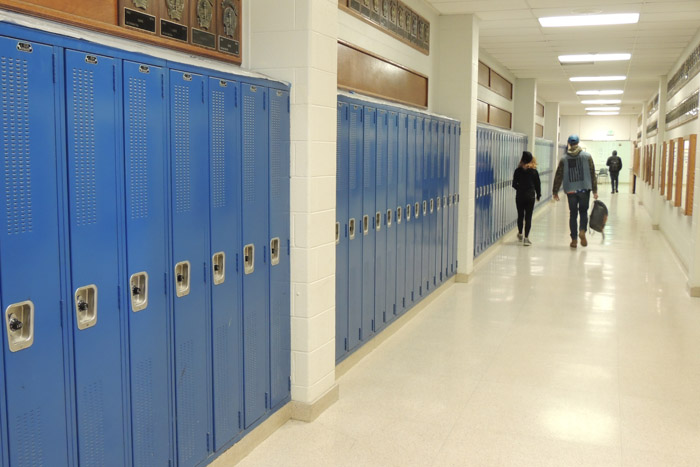 Only 60 of the 1,150 students at Queensbury High School have lockers. A survey found that students “like the idea that lockers exist, but they are not using them,” high school principal Damian Switzer said. Chronicle photo/Gordon Woodworth

Mr. Switzer had The Chronicle talk to a panel of students about lockers.

Senior Jackson LaSarso, off to George Washington University to study political science, said, “I’ve never had a locker. Well, my first day of freshman year I had one and put some pens and stuff in it, and I forgot where it was and never used it again.”

“I keep all of my stuff in my backpack,” said senior Aidan Jordi-Donnelly, captain of the championship boys’ soccer team who is headed to the University of San Francisco to study marketing.

What about lunch? Aidan said, “If you bring lunch and you’re friends with a teacher who has a mini-fridge, you can always find a way.” He notes, “The school does offer athletes lockers, but most upperclassmen who can park on campus keep their gear in their cars. It’s just easier.”

Senior Mikhail Beresnev, who will attend Walla Walla University to study computer engineering, said, “All of our classes are on computer, so there’s not a lot to carry around. And I usually buy my lunch.”

Mr. Switzer points out that in the school’s “Four by Four” scheduling, students have only have four classes a day. Each class lasts 81 minutes and meets every other day.

He adds, “And everyone has Chromebooks, and is on Google Classroom, so that access to the Cloud cuts down on material they need to carry around with them.”

Aidan Jordi-Donnelly said, “I might have one textbook for one class. Everything else is online.”

Senior Erik Swanson, who is headed to Harvard to study theoretical physics, said he considered getting a locker this year because he’s doing a physics self-study that includes a “big textbook.”

But he decided against it. He said he usually brings his lunch with an ice pack, and “I always have my stuff in my backpack.”

Mr. Switzer notes that in the middle school students “are not allowed to have backpacks….so they do use lockers.”

Robert Scheidegger, a junior, said he previously had a locker, “but I never touched it. It’s not really a hardship. In middle school I forgot stuff in my locker all the time.”

Senior three-sport athlete Bailey Gengel, headed to the University of Vermont, said, “I had a locker freshman and sophomore year, because I didn’t have a car. But now that we have cars on campus, it’s a lot easier to keep stuff in there.”