Jesse Hayes, along with his wife Megan and what he describes as “many dedicated parents,” helped start the Magic’s 8U (8 and under) team last fall because “there was nothing else out there. There were no other 8U travel teams.”

His daughter Haylee is one of 12 girls on the team. Ten are from Queensbury, with one girl each from South Glens Falls and Glens Falls. 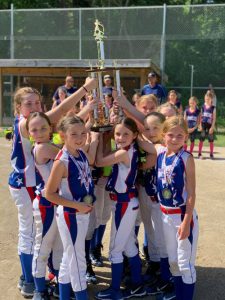 The Adirondack Magic 8U girls’ softball team with the second-place trophy at the Halfmoon tournament in June.

“We’re moving up to 10U in the fall, and another set of coaches are taking another 8U team, and another set are starting a 12U team,” he said. “I’m hoping to have four Adirondack Magic teams in the fall. There’s a possibility of another 10U team to keep groups of kids playing together.”

Coach Hayes said “people are leaning more toward travel teams than town recreation teams due to the level of competition. That’s the pattern I’m seeing. We were approached by other coaches who have teams ready to go…We don’t want to turn away any kids who want to play.”

He said “each team operates independently, and the five-person Adirondack Magic Board of Directors oversees all of the teams. We’re planning a team banquet on Friday, Aug. 23, at the Great Escape Lodge to introduce the new teams.

“It’s very exciting. We have grown into a softball family. Every parent has been amazing, but it’s the girls who built this team. They raised the money to play in the tournaments. It was built by them, and we are so proud of what they have done.”

For more information, check out the Adirondack Magic Facebook page.