King of the hot dog; launched in 1919 by Greek immigrant, still in the family
By …

King of the hot dog; launched in 1919 by Greek immigrant, still in the family 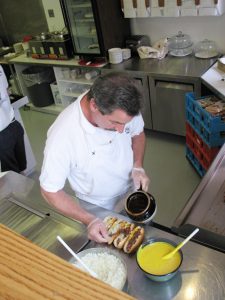 It no longer operates 24 hours a day, nor is beer served, but in the ways that matter the New Way Lunch hasn’t much changed since Greek immigrant John Floro left his fruit and vegetable business in New York City, searched upstate and found and bought the little restaurant already named New Way Lunch, on South Street in Glens Falls in 1919.

Mr. Floro turned hot dogs into its specialty, and hot dogs remain the name of its game today — grilled, served on steamed buns, with onions, mustard “and our famous meat sauce.”

Ask Peter Gazetos, Mr. Floro’s grandson who took the reins in 1990, if he’s thinking of adding a vegan alternative, he says, “We sell hot dogs. That’s who we are. We’re kind of a step back in time.”

Speed is of the essence, too.

“People only have so much time for lunch,” says Peter. “My mother [Angela, who worked at New Way for 60 years] always said, ‘Move ’em in, move ’em out.’ People need to know they can be in and out in 20 or 30 minutes. They don’t want to wait 45 minutes for a sandwich.”

Peter and his wife Susan own New Way. Their children Nick and Ali are the fourth generation. After John Floro’s death in 1950, son-in-law George Kokoletsos was majority owner. Peter joined in the 1970s, working the 7 p.m. to 4:30 a.m. shift. 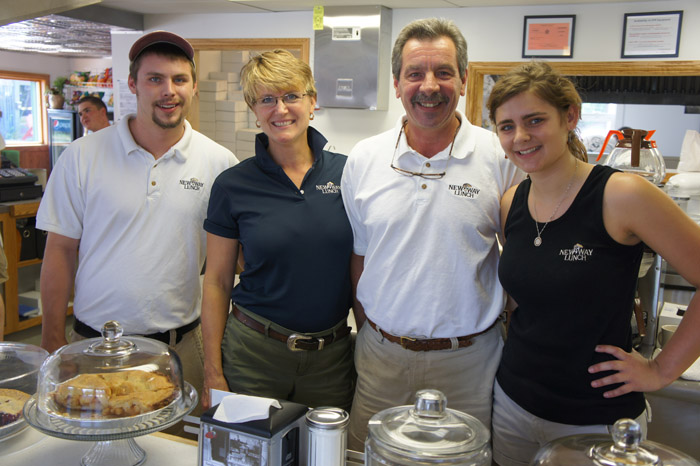 In 2006, the flagship store on South Street moved a block east, to a former bus station that has its own parking lot. Peter says, “Nick does a really tremendous job on South Street,” where the high-gear customer traffic ranges from bank executives to DPW workers to the down and out.

In 1998, they opened a second store, on Upper Glen Street in Queensbury. Peter says, “When we opened Queensbury, we expanded the menu to offer more than hot dogs, so you can appeal to the whole family — where maybe the mother doesn’t want a hot dog. So we have Greek salads, garden salads, grilled chicken sandwiches. That was the impetus for that.” 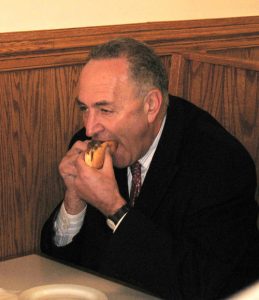 In 2011, after a nine-year quest, they bought and transformed the former Potters’ Diner in Warrensburg. It’s booming.

“People scoff at that old slogan ‘Gateway to the Adirondacks,’” says Peter. “It’s absolutely true. So much traffic goes through Warrensburg.”

Susan says, “People whose kids go to St. Lawrence and Clarkson and Potsdam stop here on their way there and on the way back, from parents’ weekend.”

Breakfast is big at the Warrensburg location, where Susan and Janet Wood do the high-volume cooking. 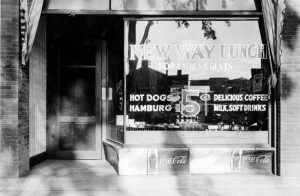 Susan also does New Way’s bookkeeping, and “Ali and I have been working for two years planning the [100th anniversary] party. Our sponsors have been tremendous. Freihofer is our diamond sponsor.” She says Bill Sullivan, the regional manager for Freihofer’s owner Bimbo Bakeries USA, “offered us a chunk of money that allowed us to make this event this big.” (See separate article below.)

New Way Lunch will celebrate its 100th anniversary with a Block Party on Saturday, Aug. 3, from 3 to 6 p.m. on South Street adjacent to their restaurant and the Glens Falls Farmers Market pavilion, rain or shine.

Owner Peter Gazetos hastens to add, “This is for one or two hot dogs, not by the dozen.”

There will also be music by the East End Boys and children’s activities.