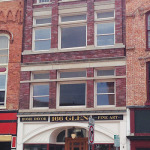 Headrush is owned by Burton Rice. Mr. Rice’s father, Peter Rice, was under contract in 2010 to buy the J.E. Sawyer building with plans for a hotel on the site, but the deal never materialized. Mr. Del Signore said his client “bought it [166 Glen] to use the second floor for office space, and as an investment. Tim will stay on the first floor and lease the space. He has done all of the work on the building.”

The Reeds bought the building in 2007 from Jonathan Segan, who owns the Jonathan Reid menswear stores.

Nine Authentic Goods, a retail collaboration between Trampoline Design and Davidson Brothers, occupied the first floor from November 2010 to April 2013, and the Trampoline advertising firm had its offices upstairs until last winter.