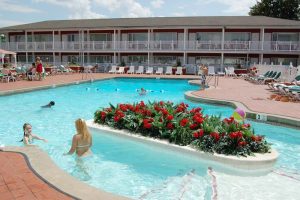 “The Georgian became available, and Dave and Erin saw an opportunity,” he said. “They plan on investing and improving the property. Some improvements will be immediate, some over the next two years. The previous owners had not done a lot lately, and it showed. They saw it as a real opportunity.”

The couple owned and operated the nearby Park Lane Motel for 14 years, but on Feb. 3 they sold it for $3.7-million to Mr. Kenny’s uncle Dave Menter and Mr. Menter’s sons David and Michael, Mr. Lapper said.

With the purchase of the Georgian, which has a restaurant and 6,000-square-foot banquet hall, the extended Kenny family now owns 18 hotels or motels in and around Lake George, with more than 1,050 rooms total.

Mr. Menter and his wife Theresa — the elder Mr. Kenny’s sister — also own Nordick’s Motel and Porreca’s Restaurant, Scotty’s Lakeside Resort in Lake George and the Country Inn and Suites and Wakita Motel in Queensbury.

We could not reach Mr. Kenny by press time.