Last weekend’s American Music Festival for Lake George instantly put the new Charles R. Wood Park on the map — and established it as a game changer.

This is an outdoor venue with enormous possibilities. It enables concert events that simply weren’t possible here before.

Some things can be improved. There are kinks to work out. But as essentially the first major use of the space, the festival on Saturday and Sunday, Sept. 20-21 couldn’t bode better for the Village, or the region.

“It was a resounding success,” Mayor Robert Blais declared.

All the pieces fit. A massive professional stage. A well-chosen ineup of excellent bands perfectly
balanced between uniqueness and broad appeal. Excellent sound system and lighting. Good selection of interesting regional food vendors (plus beer and wine). Good if not overwhelming crowds.

It was pretty great. This is the kind of event you expect down in Albany for Larkfest or something.

In other words, expect to see more big shows here that never came before.

Promoter Robert Millis of 398 Promotions in Saratoga told The Chronicle 1,600 people attended on Saturday; 900 on Sunday, plus another 100 or so each day for sponsors, press, other free tickets. 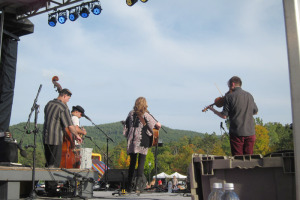 He said the vendors “did great,” though he wouldn’t give specific numbers. “The beer numbers were through the roof. Impressive,” Mr. Millis said.

A portion of all proceeds will go to the S.A.V.E. group fighting invasive species and other threats to Lake George. Mr. Millis didn’t have final numbers for that yet.

Also note: Beer or not, I was there for nearly all of the two-day festival, and this was a very well-behaved crowd.

Mr. Millis said he and co-promoters, including Dave Ehmann of Improv Records and Sam Bottini of Saratoga, made money on the event

We already have a lot to build on in the region: Shepard Park in Lake George with its excellent lineup of free, outdoor concerts — including the two-day Lake George Jazz Weekend — organized by the Lake George Arts Project, and others.

In downtown Glens Falls, the Wood Theater offers intimate shows and the Civic Center is there for arena shows. We have East Field and West Mountain.

But we’ve never had a real, big, outdoor festival space as is offered by this new venue at the former site of Gaslight Village.

Think of the Tulip Fest, PearlPalooza and so many of the big shows down in Albany that draw thousands of spectators.

The Charles Wood Festival Space puts Lake George on a par with that — adding the significant cachet of an unbeatable setting.

It’s not SPAC, nor would we want to be, I imagine — but even as nice as the Saratoga Spa State Park is, it can’t compete with what the New Riders of the Purple Sage described Sunday evening as “Blue skies, the hills (they meant the Adirondacks), and that beautiful Lake over there.”

Hard to believe it took us this long to get here. Mayor Blais said he and then-Lake George Town Supervisor Lou Tessier started efforts to create a festival space in 1998, at first on property behind the Howard Johnson’s restaurant. Then, this venue was nearly seven years in the planning — but the potential is instantly obvious now.

Putting a big-name event in this setting, nestled in a valley between trees, lake and mountains? Who wouldn’t want to be here? Sky’s the limit.

Mr. Millis, Mr. Ehmann and cohorts showed how it can be done. They could’ve used a few more hundred attendees per day, but the space was pleasant, beautiful, the music good, the vibe “chill.”

They lucked out with weather: Overcast but warm on Saturday, brightly sunny on Sunday (and breezy enough that the Adirondack Balloon Festival was grounded).

People enjoyed being there, I know, just from the informal interactions I was having over the two days.

Mayor Blais is exuberant and said he’s ready for more. Mr. Millis and Mr. Ehmann were both beaming all weekend (while not stressing over the details).

There are tweaks to be made. Hopefully permanent restrooms replace the port-a-johns soon. The vast cavern of empty VIP seats on Saturday was an energy killer for crowd and bands both. Although ticket-holders could come and go, the craft show and even the free carnival outside the gates didn’t fare well at all.

And be alert: Not everything will fly.

Friday night’s hip hop show by Bone Thugs-N-Harmony, produced solo by Mr. Ehmann, only drew about 300 people, I was told. (It likely didn’t help that it was a last-minute addition.) What it did draw was complaints — including from a Boy Scout Troop camping at Lake George Battleground Campground — especially for the raw lyrics that carried far beyond the venue.

However, the American Music Festival showed how it can be done right and be a win-win-win for region, promoters and audience. My thought, again: What took us so long? It’s so obvious, and so obviously fills a very large niche.

The Charles R. Wood Festival Space in Lake George Village? It has arrived.