WorkSmart, owner-founder Christy Alexander’s shared professional co-working and meeting space, invites the public to an open house in the renovated First National Bank building at 237 Glen Street on Saturday, Sept. 25, from 9 to 11 a.m.

They added a mezzanine to accommodate private offices.

“The building has history and there are scars. It’s okay to see that because it’s part of the building’s story,” Ms. Alexander said.

WorkSmart occupies the front part of the building, the original bank. The modern three-story addition at the back of the building is still available to rent.

WorkSmart initially opened on Warren Street in Civic Center Plaza. Ms. Alexander says it was “a good MVP” — “minimum viable product” — “a starting place to launch the business and introduce the concept of shared office space in this area.”

Fees include “all the amenities,” she said, such as WiFi.

“It’s not just a desk and a chair,” Ms. Alexander says. “It’s a membership community. I’m making sure professionals have what they need to succeed, connections, resources, tools, and collaborations with others in the community.”

She offers gatherings like a “Breakfast of Champions” goal setting event, as Covid allows. “We get to be part of watching each others businesses grow.”

She said she has space for more than 20 offices, with “a couple left to fill.”

“A lot of the marketing is educating the community on the space and what we’re here for. People who come from New Jersey or New York City, come looking for us because they are used to it. The way people work is being reimagined. We want to be a part of that, to bring that to Glens Falls.”

“The First National Bank building is an iconic feature of downtown Glens Falls,” says David Dammerman, who bought the white marble-clad Roman Revival-style former bank building in 2018. It dates from 1915.

“In giving the building new life, it was important to honor its history,” he told The Chronicle.

As renovations began, he said, “One look above the ceiling revealed yet another ceiling. And beyond that were inspiring architectural details — beautiful cast stone work and the grand arched windows that had been covered since 1969.

“Some of the damage done in earlier renovations was more than a little disheartening. As we dug further, we uncovered the opportunity to reimagine the boardroom overlooking Glen Street. 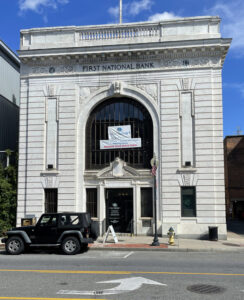 “Above its drop ceiling were a vaulted ceiling that the construction crew was confident it could restore, and more windows to uncover.

“No part of the renovation was easy.

“With every step came decisions about how far to go with restoration and puzzles about how the new construction would mesh with the old.

“Where we found conditions that would be extremely difficult to change — like the old cash vault — we chose to highlight it as a feature of the space.

“Reimagining the lobby for WorkSmart’s combination of private offices and open spaces required some creative solutions from the construction team. We couldn’t be happier with the result.

“The building is a natural fit for WorkSmart,” Mr. Dammerman says, “where clients can give their businesses a very professional location and enjoy all that downtown Glens Falls has to offer.”

Beyond WorkSmart, “there will be an additional 15,000 square feet available in the remainder of the building,” Mr. Dammerman said. — Cathy DeDe