The first year of the joint Warrensburg/Lake George/North Warren Varsity football team is a roaring success.

The Wolverines are 12-0 and pursuing a state championship.
Saturday at noon in Middletown they take on O’Neill in the state semifinal. If they win, they’ll play for the Championship in Syracuse’s Carrier Dome.

Coach Michael Perrone said he knew from the beginning that “this could be a special, special group.” 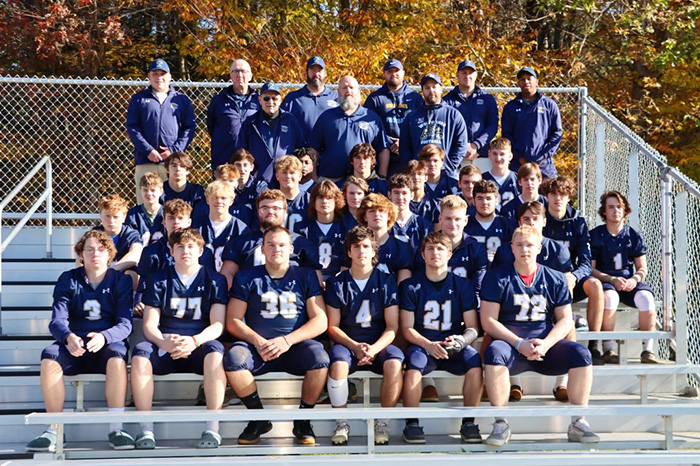 “We didn’t just merge to survive, even though we both needed it,” he said. “Numbers wise, we wouldn’t be playing right now, either side, if we didn’t merge.”

But he said, “We merged to compete at the highest level and potentially for a sectional title and even further.”

They have done more than compete. In going undefeated, they’ve mostly won by blowouts. They beat Cobleskill, 86-0, in the first round of sectionals.

And twice they defeated a vaunted Schuylerville team, by closer margins.

Coach Perrone played down the victory margins. “We’ve had some lopsided scores, but truthfully, Section 2 and Class C, it was a gauntlet this year.”

“We played some high level competition and teams. We’ve been thankful to have a 12-0 record, but it came with a lot of hard work and some tough games for sure.”

Coach Perrone said the success is “credit to the dedication of the kids.”

The Wolverines are a blend of Warrensburg and Lake George students, plus one from North Warren.

The kids voted to be the “Wolverines.”

“A couple of the kids loved the idea of having the Michigan-themed helmets — and the color scheme worked out perfectly to incorporate both school’s colors,” Coach Perrone said.

“At first, it was just a name. And now it’s become an identity.

“We talk about what a Wolverine isa nd it’s an animal who is fearless, who often will fight and prey on other animals that are two times or three times the size.

“A fearless, tough, gritty animal. Our kids have kind of taken on that identity.

Many of the teammates had never met before January. Coach Perrone said they were like “strangers.”

But now, “in all my years of coaching, this is the tightest group in sports I’ve ever coached,” he said. “And it’s funny that it’s a merged team with three different schools, but they really have — they’ve grown to become family.”

All summer, the coaching staff offered 13 weight room slots, split between Lake George and Warrensburg, so players could get three lifts in each week.

“And then on Sundays, we would do our walkthroughs and that would be everybody coming in together.

“It was pretty cool to see the commitment from our coaching staff, obviously, but the kids as well, getting all those lifts in all summer long, getting to know each other,” Coach Perrone said. 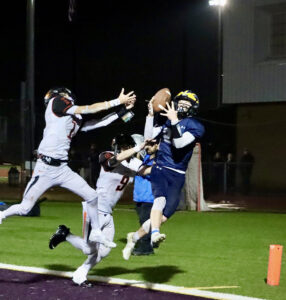 He said in the past, each of the schools has had successful individual players.

Now, “what’s amazing is the depth that we have. We have so many kids who are ready to contribute, ready to chip in.

“Each week you have those top players always performing at a high level, but a lot of those role players — we have two or three players who step up and play at an unbelievably high level.

“It’s a complete team win every time that we go out there and win,” he said.

Coach Perrone said, “Our senior group is absolutely amazing. There’s 11 seniors on this team, and unbelievable leadership and dedication to football and each other as teammates. And that’s been a huge reason for our success.”

He said the athletic directors of both schools have been supportive and helpful in the merger, as have the communities.

“If you’re going in half in and you’re doing things not together, you’re not going to have success,” Coach Perrone said.

“But if you become one team, one program and even one community in some sense, I think you have a chance of having great success.”


•
The team posted a Gofundme to cover the costs “to stay overnight Friday to avoid the early wake up” before Saturday’s noon game. Link: www.gofundme.com/f/state-semifinal-overnight-trip.