William Shatner, Star Trek’s Captain Kirk, will come to Ti event next May

Ticonderoga’s James Cawley said he is “thrilled to announce” that “Captain Kirk himself,” actor William Shatner, will come to Mr. Cawley’s Star Trek set in Ticonderoga for a special two-day event Friday & Saturday, May 4-5, 2018.

“This is an incredibly rare and unprecedented opportunity to see the Captain on his Starship once again,” Mr. Cawley writes. “It is simply not to be missed.”

“Come see the first Captain to boldly go,” Mr. Cawley urges. “Join us in saying, ‘Captain on the bridge!’ once again!”

He said Mr. Shatner will be available for autographs, photo ops, a “unique” Meet and Greet and a Q & A. 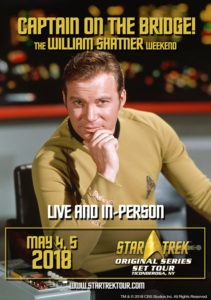 Mr. Cawley has recreated, in a Ticonderoga downtown storefront, the original Star Trek Enterprise set from specs directly from the show. It’s the central setting for his Trek-onderoga convention each August, and it’s a tourist attraction on an ongoing basis.

“Over his 50-year career, he went on to other roles, most notably in TJ Hooker and Boston Legal. But it is his role as Kirk, both on the original series and in subsequent films, that has earned him a place in cultural history, and in fan’s hearts.