It was two days after Denny Wilhelm, the former Glens Falls basketball star and high school teammate of Jimmer Fredette, was charged with possessing more than a pound of cocaine.

Speakers included Mr. Wilhelm’s parents, Den and Barb; Al Fredette, who is Jimmer Fredette’s father; and personal trainer Stacey Angell, who was a co-owner of the gym with Mr. Wilhelm and will continue to train clients there. 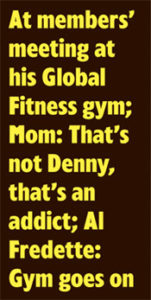 Barb Wilhelm said her 28-year-old son hadn’t been in the gym for more than a month because “he didn’t feel fit to be in front of any of you.”

She said after his 2012 arrest for heroin possession, he was living in a halfway house, “got a membership here, became manager, bought out the other partner, and worked from 5:30 in the morning to 10 at night. This became his life and it saved his life. Every single person who came to the gym was important to him.”

She said, “The Denny you have seen in the news is not Denny. That’s an addict, my friends. We are very sorry for all of this.”

Mr. Wilhelm and Catherine Peacock, 30, of Glens Falls, were arrested late Saturday night after being stopped on the Northway in Queensbury by State Troopers.

Ms. Peacock was charged on those counts, and other drug possession counts. Both were being held in Warren County Jail without bail, police said.

Ms. Angell said, “Denny was the heart and soul of this gym. Our hearts are hurting, and this a good reminder that no one knows the battles we all face every day.”

She said he hadn’t been around lately. “He wasn’t coming in when he was dealing with this. He could only be here if he were in a safe place…He had a lot of great things in place before he went down this dark path…We’re going to carry out his vision.”

Mr. Fredette said, “Denny is like a son to me. We put ourselves out there as a company that cares, and we’ve spent a lot of time and effort to show kids how important character is and how far it can take you in life…

Mr. Fredette said, “It only takes one time to get started” with drugs, “and we don’t want you to do it, and I know Denny would be here with tears in his eyes telling you the same thing.”

“Denny learned from my nephew Lee Taft,” Mr. Fredette said of the Whitehall native and prominent personal trainer. “We have access to Lee, and he will be coming here to work with these three guys. And they hopefully will become Lee Taft licensed, and that’s a big deal.”