Governor Andrew Cuomo is pushing for the legalization of recreational marijuana as part of his 2020 budget, which must be approved by April 1.

The Legislature, with Democratic majorities in both the Assembly and Senate, is expected to be receptive.

We checked in with local Senate and Assembly members. 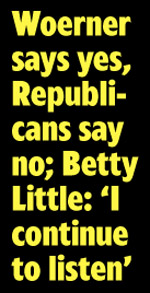 “I think it is likely to pass,” replied Republican State Senator Betty Little.

She said via email, “I’m not supportive of it but continue to listen…My misgivings are based primarily on conversations with addiction counselors who have expressed concerns to me. Some see it as a gateway to harder drug use.

“Law enforcement officials want to see a reliable field test to determine if someone is operating a vehicle under the influence. Employers are also concerned about people using while on the job and their liability.”

Should it be part of the budget process?

“It should be discussed, debated and voted on as a stand-alone measure,” she said. “Because it is proposed to be taxed and generate revenue, there’s certainly a logic to have it in the budget.

“But when policy is in the budget, it gets buried. I think bail reform, adopted in last year’s budget, is a great example of what happens when controversial and complicated policy finds itself in the state budget.”

Assemblyman Dan Stec, Republican running for Ms. Little’s Senate seat, said via email, “I have been and continue to be opposed to legalization of recreational marijuana. I’ve spoken with many in law enforcement and healthcare on this subject over the years and from these discussions I believe the risks and costs outweigh any benefits.”

“The governor raised it this year in his budget address and it seems he intends to make this part of his budget,” he said.

Should it be part of the budget process?

“I have objected and continue to object to the practice of putting important and controversial policy initiatives in the budget. Often this results in using the $175-billion state budget as leverage to pass into law proposals that would have difficulty becoming law as standalone bills.

“I’ll remind everyone the these disastrous bail and discovery reforms were passed into law last year as part of the middle-of-the-night budget process. Hardly good, transparent government!”

Assemblywoman Carrie Woerner, a Democrat, said after last Friday’s ARCC Lunch with your Legislators, “I’m for it. I’m a practical woman. It’s a nationwide trend to legalize marijuana. Many states have already done it. We know there’s a $2-billion black market industry in New York for marijuana, and we know anecdotally that people are going to Massachusetts and buying it in their legal dispensaries and bringing it here.

“There is a market. People are using this and what we don’t have are the funds associated with public safety and public health to address the downside of it. I see this as a question of when, not if, and how.

“And I think it’s really important that as we do it, we think about making sure we are funding our public safety officers to have the technology to test for current usage and that we enable employers to do the same, and that we fund a public health campaign to remind kids that just because it’s legal doesn’t make it safe, which we should have been doing for vaping as well.

“We have people who are growing it. I’d like our farmers to participate in the legal market and use it as an opportunity to turn some of their acreage into productive, profitable crops.

“I do think it’s inevitable. Whether it’s this year or next year, I don’t know.”

State Senator Daphne Jordan, a Republican, says, “I’m opposed to the legalization of marijuana for purely ‘recreational’ purposes. New York State has been gripped by a deadly opioid epidemic that has claimed far too many lives. Even Governor Cuomo himself said a few years ago that marijuana was a gateway drug, which credible research has likewise affirmed.

“While New York State could generate millions in new taxes from the legalization of recreational marijuana, what would the additional costs be to our state in terms of adversely impacting public health and making our roadways less safe? That important question needs answering. Law enforcement and employers alike haven’t fully figured a way to determine if someone is under the influence of marijuana. That also needs to be taken into consideration. We clearly need statewide public hearings that must include health experts, law enforcement, and allow for public input.

Democrat Kimberly Davis, the Clinton County Treasurer running for Betty Little’s 45th Senate District seat, said via email, “I am for legalization. We need to get marijuana out of the hands of criminals, regulate it, and stop arresting people for using it, especially in disproportionate numbers for people of color.

“Marijuana is the most widely used criminal drug in America with about 22 million users…Is it harmless? No. We need to ensure that people are educated to the effects of marijuana on the body and brain and keep it out of the hands of children. People should have the same age requirement to purchase it as tobacco, which is 21.

“New York has done a good job with all of the requirements for our medical marijuana dispensaries, let’s continue those stringent regulations and legalize marijuana.”

Republican Matt Simpson said, “I am opposed to legalizing recreational use of marijuana. I’ve attended a lot of conferences on the subject, and I believe the risk is greater than the benefit.

“We already have enough social problems, and the are not getting better, they are getting worse. In Colorado, where they legalized recreational use, there are more accidents and more people dying, and the costs outweigh any revenue they bring in. The use of marijuana leads to increased use of other drugs, but we’re not hearing about that.”

Republican Doug Beaty said, “I’m against it because the New York State Sheriff’s Association is against it. I support law enforcement. When the sheriffs feel it merits legalization, I’ll look at it again. But until they change their position on that, I’m against it.”

Democrat Claudia Braymer said, “I’m open to considering the legalization of marijuana for adult use. With nearby states and Canada legalizing it, New York should consider governing adult use, rather than leaving it illegal and unregulated. These other jurisdictions give us a framework to follow, and can help us to avoid potential problems with legalization.”

Former Republican Stony Creek Town Supervisor Evelyn Wood, running for Assembly as a member of the SAM party, said, “I am opposed to the legalization of marijuana. While I strongly support its use medicinally, and would like to see that made more accessible, there is little in the way of clear planning in place to address the particular challenges legalization of recreational marijuana would bring.

“My foremost concern is that the State is using public support for legalization to address the enormous budget gap brought on by poor budgeting practices. If the state wishes to pursue legalization…it should be taken up as a separate issue from the current budget and the legislation should be well defined with public feedback before adoption.

“We do not need legalization of marijuana to turn out like bail reform.”