By Bill Loughrey, Special to The Chronicle

“Lake George is without comparison, the most beautiful water I ever saw.”

Thomas Jefferson made this observation in 1791 on his tour of New York and New England with James Madison, perhaps the most important journey in American history made ostensibly for horticultural, historical, recreation and health purposes.

Jefferson noted that the lake was “interspersed with islands, the water as limpid as crystal, and the mountainside covered with rich groves of silver fir, white pine, aspen, and paper birch down to the water.”

Jefferson’s observation of nature — not entirely accurate in its classification of trees and fish — wasn’t the principal reason for his and Madison’s journey.

Nor was the tour mainly to see historical sites, even though it followed what modern historian Eliot Cohen has labeled the Great Warpath, where many of the most important battles in colonial America were fought.

Sailing up the Hudson River, Jefferson and Madison visited the famous battlefields at Saratoga and Bennington, and then the sites of Fort William Henry and Fort Ticonderoga (known by some strategists as the Gibraltar of North America).

Lake George occupied a strategic position, midway (at least in travel time) between New York and Montreal and the two most decisive battles in colonial history ­­— Saratoga and Plattsburgh. Saratoga is touted as “the turning point of the Revolution” because the American victory helped persuade the French to enter the war as America’s ally. The American victory in the Battle of Plattsburgh essentially ended the War of 1812. 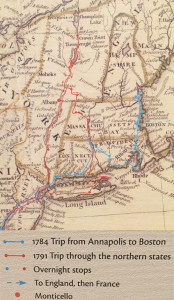 But the real purpose of Jefferson’s New York-New England expedition in 1791 was to find a way to counter the political juggernaut of Alexander Hamilton.

Hamilton, as Secretary of the Treasury, was dominating the “Washington scene.” Actually, the nation’s capital was in New York and Philadelphia for the first dozen years — in Hamilton’s own backyard!

Hamilton became President Washington’s chief lieutenant or leading cabinet member, winning approval for a national bank, a debt repayment plan and other initiatives over the objections of Jefferson, Madison and their allies.

Hamilton’s relationship with Washington became the foundation for the concept of Chairman/Chief Executive Officer, used so prevalently in modern America.

In looking to counter Hamilton, Jefferson and Madison succeeded beyond their fondest hopes or wildest dreams. They formulated what historians often now refer to as Jeffersonian democracy and founded the oldest political party in the United States — today’s Democratic Party.

Jefferson’s radical break with the past had a boldness exceeding even the initial Revolution. (Notably, slave James Hemings, older brother of Sally Hemings, accompanied Madison and Jefferson on the trip, raising the issue of whether their political system was more democracy or hypocrisy, but that is a controversy for another article.)

Equality — which Alexis de Tocqueville called the distinguishing characteristic of American civilization — became the most powerful force and source of energy in the society. An explosion of newspapers created a wave of public opinion sweeping the Jeffersonians into office and establishing the power of the common man.

As historian Gordon Wood noted: “Public opinion was simply…the combined product of multitudes of minds thinking and reflecting independently, communicating their ideas in different ways, causing opinions to collect and blend with one another, to refine and correct each other, leading toward the ultimate triumph of Truth….In all endeavors — whether art, language, medicine or politics — connoisseurs, professors, doctors, and statesmen had to give way before the power of the collective opinion of the people.”

This sea change resulted in the Second Great Awakening and an explosion of voluntary associations in civil society.

New York became a place for the cross-fertilization of political ideas and organizations. It quickly exceeded Virginia and Pennsylvania to become the most populous state and biggest commercial center in America.

The organization of all three of the major political parties in the first half of the 19th century took place in New York — the Federalists with Alexander Hamilton; Jefferson’s and Madison’s party, led by Martin van Buren (“the Magician”); and the Whigs, through upstate New York editor and publisher Thurlow Weed.

While economic statistics and measurements were primitive during Jefferson’s time, New York’s largest industry was probably newspapers and printing.

Jefferson and Madison developed the concept of using the newspaper to help found their original political party and influence citizens to become part of its organization and embrace its agenda.

The Federalists were much slower to understand the importance of influencing public opinion and were soon vanquished from the American political scene.

Throughout most of the 19th century, the majority of American newspapers were organs of one of the political parties, thriving on government contracts and political contacts.

The two Virginians also engaged in one of the first candidate recruitment efforts — seeking opponents to Alexander Hamilton’s Federalist allies in Congress.

Touring the battlefields of the northeastern United States also helped — with mixed results — these two future presidents understand the political and military terrain where much of the conflict subsequently occurred resulting in the War of 1812.

When an embargo imposed during Jefferson’s second term proved highly controversial, he declared the Lake Champlain region to be in a “state of insurrection.”

Madison was luckier. The decisive battle at Plattsburgh forced the British to radically alter their negotiation stance and resulted in the peace treaty in which America was not forced to forfeit any land.

The fallout from this conflict led to the Monroe Doctrine, which has governed foreign interventions in this hemisphere for two centuries and served as the long-term basis for American foreign policy.

This region’s 18th and 19th century heritage continues to play an important role in Lake George even now.

Stephen van Rensselaer (whose family managed the only successful patroonship) served as a general in the War of 1812, and Philip Schuyler (who was married to Catherine Van Rensselaer) served in major military capacities in both the French and Indian War and American Revolution.

While neither man was necessarily a great general, the Van Rensselaer family in 1824 founded Rensselaer Polytechnic Institute, the nation’s oldest technological research university.

Today RPI has partnered with IBM and the Fund for Lake George in a high technology environmental effort aptly known as The Jefferson Project, aiming to make this the “smartest lake in the world.”

On a personal level, Jefferson’s and Madison’s trip benefited their health.

Madison’s bilious attacks (probably from his epilepsy) and Jefferson’s periodical (and perhaps political) headaches vanished, possibly at the thought that the two had formed an alliance and strategy to counter the omnipresent Hamilton.

More likely, their personal and political rejuvenation was due to the fishing — an abundance of speckled trout, salmon and bass according to Jefferson’s diary — and fresh air on Lake George.

Editor’s note: Bill Loughrey, a Glens Falls High School classmate of Chronicle editor Mark Frost, is author of Political Will: Dominating Force in American History. He is working on a biography of Charles Evans Hughes and is married to a descendant of the Van Rensselaers.