Mr. Gohn is the president of insurance agencies Associates of Glens Falls and Loomis & LaPann. Mrs. Gohn oversaw the design, working with architect Ethan Hall. The insurance agencies will continue to operate in their long-time home, the next building north, 228 Glen, famous for the century-old clock out front, plus at the renovated, rebuilt 220 Glen.

“Next month we hope to start moving people over — maybe six or seven,” including himself, Mr. Gohn said.

“When we were running out of space,” he said “we looked at Saratoga” and considered “building someplace else.”

But “we came to the conclusion that we wanted to stay downtown, keep the culture going” by being adjacent to the original office and extending their downtown roots. He notes that its Loomis & LaPann agency has been “a Glens Falls institution since 1852.”

A bigger factor? “We watch too much HGTV,” the Gohns said. “Because of HGTV, we always wanted to do a building downtown.”

Mr. Gohn said in 2018 he approached Achenbach Jeweler Judy Pontiff and that she was instantly agreeable to selling it.

“We worked with Rick before. He did our house. I always trust his gut,” said Mrs. Gohn. Mr. Chase, who said he’s been in the business for 36 years, noted he built Mrs. Gohn’s mother’s house too.

He said the 220 Glen project “was right in my wheelhouse.” As issues mounted, he said, “there were days I wasn’t sure how far he [Mr. Gohn] wanted to take it” but “the scale of the project I didn’t have a problem with at all.”

From the roof, which needed replacing, to the basement, where part of it was dirt and there was “a hole in the cast iron” septic pipe, there were big problems.

Mr. Gohn declined to reveal how much they spent on the rebuild, beyond “a lot more than we anticipated.”

Beyond supply chain issues, soaring cost of materials and difficulty getting subcontractors and employees, in “peeling back the layers, the onion if you will, there were a lot of problems.”

He admits to wondering “what did we get ourselves into?”

On the back wall, “when they started going up to take the windows down, it was all crumbling so they had to take it all down quick to save it.”

He credited Rozell Industries. “They know just what they’re doing. To them it was just another day at the office.”

As planned, the back of the building was extended toward the Elm Street parking lot and an elevator was added.

Mr. Chase said in gutting the building they took “close to 600,000 pounds” of debris away.

“We were loading a 30-yard dumpster twice every day,” said carpenter Denis Mullins.

“Plus my trailer all summer,” added Mr. Chase.

He said, “There was nothing usable,” although when they installed windows on the all brick north wall, the brick they cut out they used to build the fireplace in the apartment’s third-floor living space.

All the electric, the HVAC is brand new.

The insurance agency will use the first floor and the basement.

At the back of the second floor is an unfinished space. “This is going to be a rental” for a business, “so we’ll build to suit,” said Mr. Gohn. “But nothing would make me happier than having to bust through and come up here.”

He said they have 30 employees now and are looking for more, plus they’d like to acquire other agencies as they did Loomis & LaPann.

Mr. Gohn adds, “Jean Moon, she’s 87. She hasn’t worked since Covid but she’s still on the payroll.” He said as Covid ebbs and the new project is completed, “we’re hoping that she’ll come back.”

Mrs. Gohn mentions “the small town feeling” that’s been part of the rebuild.

She said it’s been a “labor of love” for vendors and contractors. “People took a personal interest in it.”

She mentions picking up fixtures she ordered at Askco Electric. “They’re so invested in it,” she said, that they enthuse, “This is for Jen’s project.”

The ‘buy-in’ of client contractors & vendors

Chuck Gohn said, ”We were deliberate in hiring as many AOGF [Associates of Glens Falls] clients as possible. Their support over the years has fueled our growth, and without them, an undertaking of this scope wouldn’t have been possible.

“In addition to using as many direct contractors as possible, Jen and I went further by asking each of the main contractors for lists of their material suppliers. We reviewed the lists and identified suppliers who were also Associates of Glens Falls customers.

“We then directed the contractors to purchase materials from our clients whenever possible. This allowed us to expand the reach of the project to as many customers as possible.”

Office basement with ‘tricked out’ kitchen

Classic is the emphasis in most of the 210 Glen renovation. The exception is the basement, starting with its checkerboard floor.

“I want it to be cheery, a little funky,” said Mrs. Gohn.

“Plus everybody likes to cook in our office. They like to share a meal. So this was a big component when we designed it, we gotta have a tricked out kitchen for everybody to —”

Mrs. Gohn completes the thought. “They do a nice Thanksgiving dinner together, but their kitchen [at 228 Glen] everybody’s sitting here, there and everywhere else.”

Mr. Gohn says the space will double as an informal meeting space. The tables can be slid together, and there will be a monitor on the wall for Zoom meetings.” 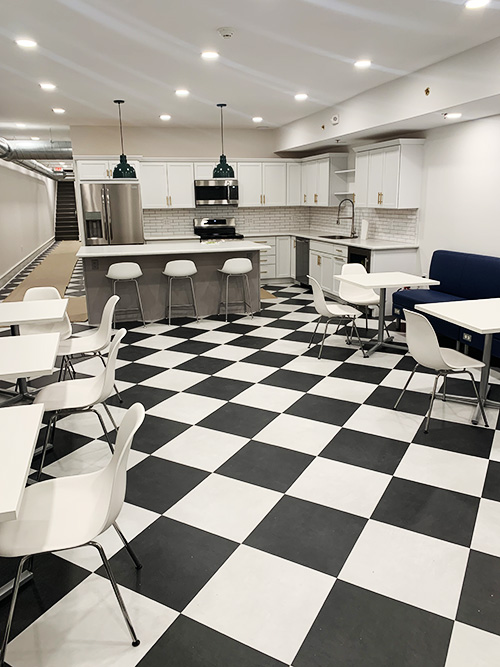 The 220 Glen renovation includes a spacious two-story apartment, mostly on the third floor plus the front of the second floor looking across Glen Street. The Gohns imagine moving into it if they sell their house and retire.

Even sooner, Mr. Gohn said their three children — two in Boston, one in Seattle — already “want the apartment,” for when they’re back in town. “That’ll be party central.”

Share
Previous Battle over use of herbicide vs. milfoil on Lake George
Next Our April 28 front page