Two native writers — Johannah Davies Spero, Lake George Class of 1991, and Marika McCoola, Glens Falls Class of 2005, have new books targeted at Young Adult readers and presented by professional publishers coming out, this week and next. Here’s a look at what’s to come.

Johannah Davies Spero, the Lake George grad, writer and teacher, moved back to this area with her family last year.

Her new book Forte launches with a party at Northshire Bookstore in Saratoga on Tuesday, July 28, at 6 p.m.

It is a Young Adult tale with elements of magic and fantasy that is set in Whitehall — here, back to its original name of Skenesborough.

“Sami is a 15-year-old musician who moves from New York City to a small upstate town,” Ms. Spero told The Chronicle.

“She’s the new kid, and the last thing she wants is to hide behind the piano. She’s tall and athletic, and the coach really wants her to join the Volleyball team. Coach takes her by the shoulders and she gets this jolt of magic, and she’s suddenly able to play really well.

“They’re all drinking this potion on the team. It looks like blue Gatorade, and it makes them play better. But it turns out, the next time she goes to the piano, she cannot play. It’s really drawing on an ancient legend, about who she really is, the DNA and the values, what does she believe is important, the piano or her newfound success and popularity in school? At the same time, there is the ancient rivalry, the artistic versus athletic, that is heightened by the magic.

She’s the one who has to make it better for herself, and the town.” 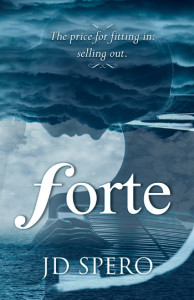 “Everyone would say, ‘Play for Panic,’ Ms. Spero says. “My entire story was inspired by this play on words. But I was not going to make a villain out of such a beloved coach from my high school. So I changed her name, and then I had to come up with a new name for the book. Forte, has the double meaning of something you’re good at, your strength, and a musical term for playing with power.

Why Whitehall? “My husband and I used to live on the North Shore of Boston, so we’d come up this way to visit my parents (Jim and Janet Davies). I always thought it was a good town for a story, with Skene Manor on the hill, and the canal. It’s this ordinary town with a splatter of grandness.”

And then, there’s this: “We were both working full time and going to school for our Master’s degrees, and we were planning to get married but didn’t have the time to get a marriage license in New York. I called the town clerk in Whitehall and asked if we could get it after hours and she did. She met us as we were coming through town at 8 o’clock one night.”

The book is available to order on amazon.com. The official launch is Saturday, July 25. Find other events — including the Chronicle Book Fair on Sunday, Nov. 8 — online at jdspero.com.

Ms. Spero self-published her first book, Catcher’s Keeper last year, using professional designers and editors she paid herself, she noted at the time.

Catcher’s Keeper imagines what would happen if Holden Caulfield of Catcher in the Rye were a real person who learned ahead of time that Mark David Chapman planned to assassinate John Lennon, somehow spurred by his book.

“I had planned on self-publishing again, using everything I learned the hard way on Catcher’s Keeper,” she says. “Then a friend who was doing publicity for this publisher Xchyler (‘schuyler’), said I should try it with them. Even if they said yes I could always decline.”

They offered to take the book, she says, and with a royalty percentage that she found especially fair.

Working with a publisher this time, Ms. Spero says, “I realized quickly, maybe I really have more to learn. I’d done a few drafts and already worked with some editors, but they tore it down — and built a mansion.”

Right away, she says, the editor identified a problem character — Sami’s mother — and helped “make the character real,” she says. “They asked really tough questions. It’s mine to create, but it has to make sense. In Young Adult books, a lot of time, the mother is just absent. But here, the mother is there enough it filters into the main character’s experience.”

Ms. Spero says, “It was really interesting. They do everything online, through Google Chat, emails, Facebook messages. I never had a conversation on the phone with them. Everything is documented, in writing, online. It’s been a real learning experience for me.”

More help came from her brother, Jim (also an author).

“I was never really into fantasy or magic books,” Ms. Spero says, “but I grew up right next to this person who was a huge Dungeons and Dragons aficionado. I give him huge kudos. When I had problems I had to get over, like how to do the magic, how can it make sense, what are the rules of my world? He would just tell me, It’s your world. You make the rules.”

Ms. Spero is already on her third book — in a different genre, but with again a teenaged character at the center. Now a full time writer and stay-at-home mother to three young boys, she was formerly a middle school English teacher.

“This new one is about a good boy who makes some really awful mistakes, and the only one who knows is his little brother.”

She laughs, “It looks like I’m so proficient, but all these books were in process for a really long time. This one (Forte), I started almost four years ago. I can’t even describe the feeling of waiting for it to come out, now.”

(Disclosure: Marika is a close friend of this writer, who knew her since she was 4.)

Ms. McCoola went to Maryland Institute College of Art in Baltimore for illustration — and got her MFA in writing for children from Simmons College in Amherst, Mass. — but this first book is illustrated by another artist, Emily Carroll.

Baba Yaga’s Assistant grew out of an MFA project — and, in fact, Jen Linnan, the outside mentor assigned to Ms. McCoola for the project, offered to become her literary agent two weeks after graduation.

Ms. McCoola says, “My style of illustration didn’t fit with this story. I do three-dimensional mixed media which is quirky and sometimes a little dark. So much in this book depends on the facial expressions. She added, “I was blown away by Emily’s illustrations, especially how she used the color palette as the story progressed.”

“The book came to me as an image of the first spread you’ll see in the book, people telling stories of Baba Yaga and what she does. It had to be a graphic novel because of the iron teeth she has, and her house that stands on chicken legs.”

Baba Yaga is a popular Russian folk character, known for eating bad little children but who also appreciates anyone who can outsmart her, Ms. McCoola explained.

Her own story is about a young teenaged girl who was raised by her grandmother after her mother died young; her father has been mostly absent and is about to remarry to a woman with a young, troublesome daughter. The young protagonist, Masha, runs away and apprentices with the old witch.

It’s a pretty dark tale, Ms. McCoola says. The take-away? “We are all trying to search for a family in which we belong, and it’s not necessarily our biological family.”

Her target audience is kids ages 9 to 14 “who like mythology,” she said. “I also love the idea of a character who rewards those who trick her, being smart and using what you have to the best of your ability.”

She said, “Writing a graphic novel is like writing a movie script, only more.” Besides the words, she plans out all of the drawings — even as another artist will do the illustrations. “You have to describe everything that is going to be on the page. You determine how many panels are n a page, where the page turn will be, you describe what the character looks like and track the props.” Even as a new author, she had veto rights on the choice of illustrator and the drawings themselves.

Ms. McCoola lives in Boston, and is currently working on several more book projects, and circulating two more picture books with publishers. She also teaches online through Empire State College, and works in a bookstore. Find info on her book tour online at marikamccoola.com.