Meanwhile, improvements at the Feeder Canal trail in Kingsbury are adding a tunnel under Route 196 plus two bridges. (See separate story on page 6.)

The Queensbury project included a new bridge over Halfway Brook. The trail goes through Glens Falls watershed from Potter and Aviation Roads south to Peggy Ann.

“That’s just part of it,” Mr. Strough said. “I have a three-ring binder of everything I’ve designed and all the permits.”

He said, “It’s all been a six-year project. Look at the Rush Pond trail and the parking areas for that. We want to do something similar for this, just as nice. It took 10 years to get that one done.”

“This is another link in the regional system,” Mr. Strough said. “One more and it will all tie into the Feeder Canal trail, Warren County Bike Trail, Halfway Brook and a connector trail with Cole’s Woods….

“You’ll be able to go from any of our trails in Queensbury all the way to Buffalo if you want.” 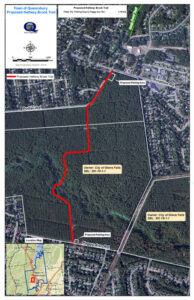 He said the Halfway Brook Project is budgeted at “under $200,000.” That includes a $100,000 grant from the State Dormitory Authority, through State Senator Betty Little, and about $60,000 in donated materials from developer Rich Schermerhorn.

As with outdoor venues throughout the region, Mr. Strough says, “Ever since Covid, I have never seen as many people using the Rec trails here in Queensbury.”

Chronicle Managing Editor Cathy DeDe writes: The Feeder Canal Alliance has received $1.2-million in state funding to build a pedestrian tunnel under Route 196 in Kingsbury at Towpath Road, plus two bridges to cross Bond Creek and the Feeder Canal itself.

It’s part of the $200 million Empire State Trail project, passed and funded by New York State two years ago, that aims to create continuous trails from New York City to the Canadian boarder and west to Buffalo.

Canal Alliance director Jeanne Williams said the local improvements will connect the Canal trail from Fort Edward along a 10-mile stretch to Fort Ann, effectively from Richardson Street in Queensbury all the way to Fort Ann.

The work is expected to be completed by the end of this year, she said. This leg of the Empire State Trail would connect “from Waterford to Whitehall,” Ms. Williams notes, about 25 continuous miles from Schuyler House in Schuylerville to the village of Fort Ann.

Ms. Williams said the designated route from Fort Ann to Whitehall along U.S. Route 4 is “hazardous” for pedestrians or bicyclists. “They have studies underway, looking at alternatives for getting the trail off the road.”

Intensive use during pandemic

As with other outdoor venues, Ms. Williams said the Feeder Canal Trail has been very busy during the pandemic shutdown.

“We have no way of tracking it, other than members saying, ‘Boy, the trail has really picked up.’ I go to the Silos on an evening, between 6 and 7 p.m. and you see so many people going by. It’s phenomenal.”

Ms. Williams says: “There are so many people on the trail, that no one is littering. People would see you. You aren’t finding the little bags of dog waste tossed into the grass.

The state Canal Corporation didn’t even fill this and other canals until about July, Ms. Williams noted — then the Feeder Canal was encumbered for some time by blowdown trees after heavy storms earlier in the season.

She enthused over how much the trail and waterway are being used now. “It’s really great,” she said.

The Alliance’s annual Canoe and Kayak race in June was first postponed to August, then went virtual.

It’s still “open” as a fund-raising option, Ms. Williams said, for anyone who wants to “paddle, walk, run or bike for the five miles.” Registrations and donations are welcome for an extended period through October 18. Those who raise $100 or more will receive a T shirt.

They aren’t doing the “Paddlers Raffle” prizes this year, Ms. Williams said, rather than have to mail sometimes bulky prizes to winners who often come from far as well as nearby.

Share
Previous Our October 1 front page
Next The expert on hemlock woolly adelgid: How to fight Lake George invasive