Town of Kingsbury residents will vote on May 13 whether to approve a $650,000 bond to fund construction of a new town hall, paving the way for the group looking to renovate and reopen the current town hall as the new Strand Theater. Tonight, April 30, at 7 in the Kingsbury Volunteer Firehouse on Burgoyne Avenue, there’s an informational meeting on the town hall project.

The former office of pediatrician Dr. Joel Solomon, on Michigan Street near Burgoyne Avenue, would be renovated and expanded as the new town hall and court if voters approve the bond issue. The town has already purchased the building from Dr. Solomon for $185,000.

It has agreed to sell the former Strand Theater building in downtown Hudson Falls that currently houses the town hall.

The not-for-profit Hudson River Music Hall will to buy the Strand building for $175,000 — with the deal closing on Nov. 1 of this year. The group aims to transform it into a modern performing arts center that also resonates with the building’s heritage. 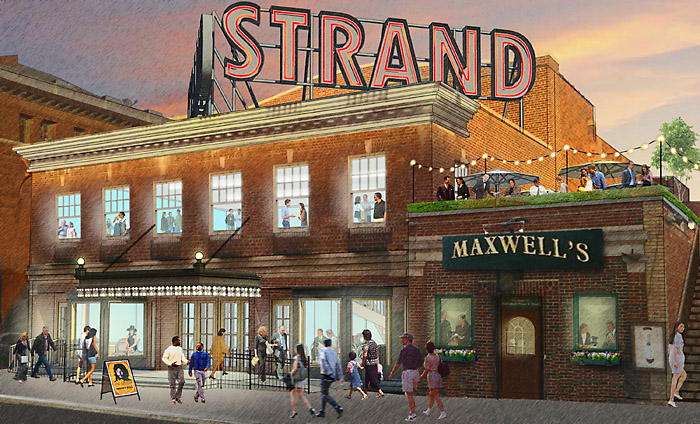 Town of Kingsbury officials are supportive of both the new town hall and the Strand revival effort. Village of Hudson Falls officials aren’t as smitten.

Village trustee Mike Horrigan — acting, he said, as a private citizen, led the petition drive that forced the bond referendum.

“The vote was to question whether the town should bond that amount of money,” said Mr. Horrigan.

But not everyone sees it that way, as he himself acknowledges. “What I don’t understand is how the narrative changed, that now people think this was to stop the Strand.”

Jane Havens, who chairs the Strand Revival Committee, accuses some in the village of “monkey wrenching” the theater effort. She and others say stumbling blocks have been put up by the village — a series of challenges for insufficient parking, not enough wherewithal to achieve a project this ambitious, and now the bond.

Mr. Horrigan, despite having helped force the bond referendum, and the village government subsequently asked the town to cancel the vote. The village now proposes to let the town hold court in the village building at nominal cost, which it says would allow for a much smaller, less costly addition to the Dr. Solomon building.

The town says the vote will go on.

“We want a vote now,” says Town Supervisor Jim Lindsay. “We want the people to have a voice. If we get the right information out there, the people will vote for it.”

Town councilman Paul Bromley agrees. “I am confident in the town’s ability to win the votes, when people are given the right information.”

Mr. Lindsay says the bond won’t raise taxes, and he contends the town proved its fiscal restraint by constructing a new $1-million-plus highway garage well below the bonded amount.

The town says its engineer first estimated the town hall would cost $760,000. “The town said that’s more money than we want to spend,” Mr. Bromley says.

Instead, they came up with a way to keep it at a $500,000 limit — not including the $185,000 purchase price, which town officials note will be largely offset when the Strand purchase goes through.

They say the $650,000 bonded amount allows for unexpected contingencies.

The cost-saving solution for the Town Hall and Court project? “We’ll do it ourselves,” Mr. Bromley says, by hiring a carpenter and carpenter’s assistant as temporary town employees, without benefits, rather than contracting it out.

Village trustee Mr. Horrigan says of having pushed for the bond referendum, “I slept on it and decided, I need to do something. I didn’t want five guys in a room deciding that. If the electorate says go for it, that’s good by me. Let everybody decide with that high a number.”

“If it’s passed, it’s strictly up to the Town Board then. It’s their discussion. So be it. That’s the way the process is supposed to work. I’m not going to hold any hard feelings.”

Mr. Newell says it includes the two-tiered balcony that people — including himself — preferred. “It becomes a draw,” he said of a balcony, and it’s in keeping with community members’ recollections of the Strand when it was a movie theater.

Plan D provides for 450 seats. Another option allowed for as many as 650 seats, but Mr. Newell said they were tight, and sight-lines were bad. He said it was more “like the 1920s movie theater” that the Strand was, not the performing arts center with a stage that his group envisions.

The architects are to attend the Town of Kingsbury’s informational meeting — tonight, Thursday, April 30, at 7 p.m. at the Kingsbury Firehouse on Burgoyne Ave.