The gin is flowing at Springbrook Hollow Farm Distillery. So is the bourbon, moonshine, vodka and rye.

Things have gone so well since their opening in 2015 that Springbrook is embarking on a $1.4 million, 8,000-square-foot production facility and year-round tasting-events room that will more than double their current space. Most important, said Matt Colucci, it will give Springbrook a high-profile location on the north side of highly trafficked Route 149, less than a mile east of the Route 9L intersection, in Fort Ann near the Queensbury line. 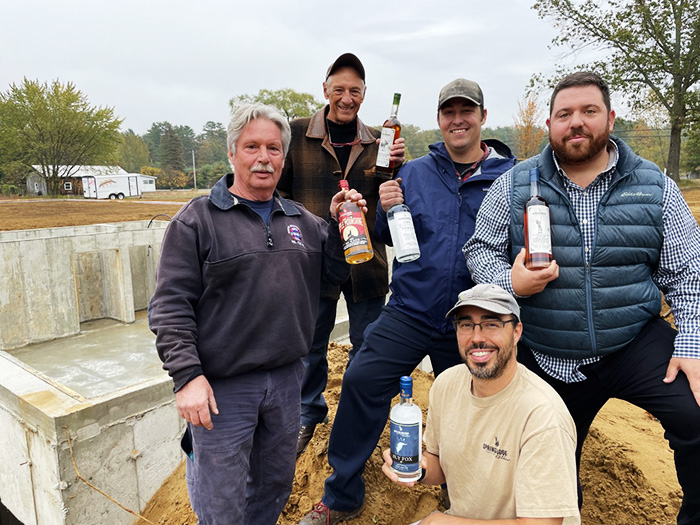 Mr. Colucci, one of Springbrook’s five partners, serves as its spokesman. He joined the business a year after the original partners — David Bannon, Mike Forcier, Tony DeSantis and Ken Rohne — built the distillery in a converted horse barn on the Bannon family’s property

The new property abuts it. It’s even still on Clements Road, which loops around to 149 behind the Queensbury Truck Stop.

Dr. Bannon said lumber harvested from the site will be used in the new building, and the nearly five acres includes a spring and woods, “with room to expand,”.

Mr. Colucci notes, “It’s in Fort Ann, but it borders Queensbury, Fort Ann and Lake George, and it’s in the Adirondack Park.” He said they had to work “with six separate agencies,” including the Adirondack Park Agency, and municipalities to secure rights and permits.

It was “very time consuming,” Mr. Colucci said. “But they were good to us.”

The foundation has been poured. They hope to be ready by spring of next year.

‘More of a taproom experience’

He said the current Springbrook barn is over 4,000 square feet, “but it’s not all usable because of the beams.”

It’s so tight, jokes master distiller Christian Ryan, “Right now we have to move one bottle out to put one in.”

The new place will be “more of a taproom experience,” Mr. Colucci says.

“We’ll serve local wines, beers, have food and food trucks. It will seat up to 100 people, with an outdoor deck and tasting room. Now it’s pretty much outdoor only, on our deck, with a small taproom.”

The style will be “Adirondack rustic, rustic-modern,” the partners said.

The current site is famously picturesque, its open deck on a hill overlooking open fields and French Mountain, but it’s also limited and weather-dependent.

Mr. Colucci adds, “The business is growing so much, we might still need the barn for storage.”

They plan equipment upgrades such as a new bottling line.

A lot of the process has been labor intensive — including hand-waxing the tops of each bourbon bottle, two at a time.

“It’s a nice touch,” Mr. Colucci says, “but at this point we need to be more automated. Our projected goal for this year is about 100,000 bottles.”

What numbers the new larger facility will enable, “it’s tough to say,” but as a benchmark, Mr. Colucci says, “We’ve pretty much doubled the business every year.”

Mr. Colucci says most craft distilleries do about 75 percent of their business on site in a tasting room, something “we haven’t had,” which bodes well for the future.

Springbrook thrives off-site. “We do farmers markets and events like festivals all over New York” from New York City to Rochester and Buffalo, Mr. Colucci says.

“We’ve got a huge team on Saturday and Sunday and Fridays. We do really well in the Hudson Valley, Westchester and Long Island. In New York City, it’s tough to penetrate. The name brands really dominate.”

Total sales staff is about 25 to 30 people. Three distributors serve retail and restaurants in New York, New Hampshire, Maine, New Jersey and Connecticut, he said, and they aim to add a fourth distributor “in Maryland, D.C. and Delaware. We are allowed to distribute ourselves in Vermont, also.”

Wholesale, their best seller is the Sly Fox Gin, Mr. Colucci says. Farmers’ market patrons “tend to gravitate to flavored products, like the Cowboy Coffee and Apple Moonshine,” he said. “We learn more and more every year what works.

The new facility will offer more opportunity for events like their annual Memorial Day Party, “always a hit,” Mr. Colucci says. “We have a lot of big plans for events in summer and fall, and we can book private events, too.”

“Direct to consumer business is where you want to go,” says Mr. Colucci. “You have a bigger chance of surviving and growing as a company, but it’s also a lot more hands-on and there’s more logistical work. But it leads to more natural growth, when you’re out there talking about the product and engaging with the customer.”

“We want to do more at the facility. People can come hang out, we can have different specialty cocktails. Look at Common Roots: It’s always packed with people hanging out,” Mr. Colucci says, pointing to Christian and Bert Weber’s brewery in South Glens Falls, which itself is expanding yet again. “They’re friends,” he adds.