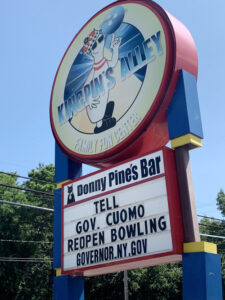 The Chronicle called Mr. Bohannon to ask how he’s doing after the new mandate. “It’s already cost me about $4,000 in business from canceled parties,” he said.

They cancelled “because they will be required to wear masks.” He said he’s also lost at least one regular bowler.

Mr. Bohannon said he’s opting for masks instead of seeking 100% vaccination status because “if you require vaccinations only, I’m going to lose business that way too.”

Rule enforcement can be a touchy issue. “There’s always that one person out there that’s just looking for a fight. We dealt with it last year,” he said. “I’m not going to put my staff in that position.”

“We’re heading into our busiest time of year — in December. January, February, March are our busiest times,” Mr. Bohannon noted. “This is when we make our money and that’s the way it is for bowling centers throughout the state. And it’s definitely going to hurt.”

Prior to the mandate, he said, “Business has been very good — and not just for me, but I think for the majority of centers across the state.

“People want to get out and do things. They have extra money they can spend now. They’ve had it…with the government giving people money.”

Prior to Governor Hochul’s Covid order, Mr. Bohannon’s “biggest fear leading into this busy season was the rising inflation.

“Eventually, if the price of everything is going through the roof, people are going to have to decide what to do with that discretionary income,” he said. “Do we buy food? Do we buy gas? Do we buy clothes? Or do we go bowling?”

He says, “Bowling has always been recession proof. Not that we’re going into a recession by any means. But the money is starting to dry up for people.

“Now this new mask mandate I think is going to be more of an immediate impact on us than the inflation issue.”

“I just want to have a good season,” Mr. Bohannon said.

He’s been president of the bowling proprietors organization throughout the pandemic. “It’s been busy the last few days because of this new mandate,” he said. “A lot of members are upset.”

Share
Previous Do something bold with that $10-million!
Next Our December 22 front page