Tyler Russell says he comes from a family of “serial entrepreneurs,” and the newest venture for him and his wife Julia Sanzen is a major plunge into returnable bottles and cans.

The couple bought the former Stewart’s property at 255 Ridge Street (across the street from the new Stewart’s) in Glens Falls and have opened Rocket Recycling.

Mr. Russell said they also purchased 88-90 Main St. in Hudson Falls, where he says they’re approved for a second location.

They plan to open in Queensbury, too, but don’t have a location yet.

Mr. Russell says they’ve invested “many tens of thousands of dollars” buying state-of-the-art machines made by Binghamton company JK Peris to speed the process of handling the returned beverage containers.

Rocket promotes itself as “The Fastest Redemption Center in the Galaxy.” 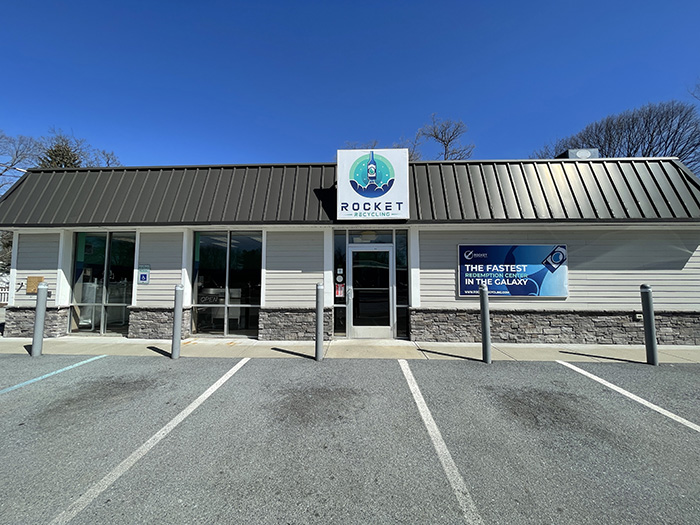 “We will be making a six figure investments in another machine by the same manufacturer here shortly for sorting,” Mr. Russell added.

He said his brother Garrett and father Whitney own the Sunnyside Par 3 golf course in Queensbury.

All three of the Russells co-own StoriedBoards, a wood reclamation business based in Lake George.

Up until recently, Tyler and Julia also owned and operated the Farmer’s Hardware restaurant in Saratoga Springs.

Tyler said they exited the restaurant after “two years of the hardest work we’ve ever done as individuals for survival” during the pandemic.

“The risks are too high, and the return on investments is too low for us to continue as restaurant owners,” he said, citing Saratoga’s seasonality and high rents.

He says manager Allegra Christidis handles “the moment-to-moment operations,” while he and his wife “run it from the top down.”

He says the advantage of the bottle redemption business compared to running a restaurant is that “you could shut off the lights and go home at the end of the day. This business seemed to check all the boxes. Support for the work life balance while still being entrepreneurial.”

Some bottle and can redemption center operators, like Jade Eddy at MT Returnables in Queensbury, urge the state needs to increase the handling fee centers receive.

Tyler said, “Hey, I would always like the opportunity to make more money…If we aren’t making money, then we don’t have a business. We don’t have a livelihood.”

But, he adds, “I wouldn’t be going into this business if I didn’t think that it could work for me at the three and a half cents.

“Does that mean that it works for everybody? No. But we believe that we can make it work,” he said.