By Gordon Woodworth, Chronicle News Editor
“This is the kind of thing that makes my job …

“This is the kind of thing that makes my job so great,” said Sen. Charles Schumer, the top Democrat in the United States Senate, as he toured four historic buildings in downtown Hudson Falls on Friday, Dec. 8.

“To see all of the activity and the revitalization and the hope in all of these buildings I visited is inspiring.” 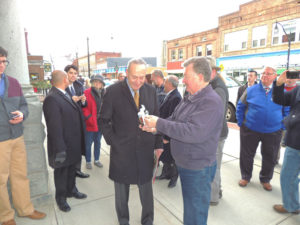 In the courthouse in the new Hope and Healing Recovery Community Center, its director Ashley Livingston told Mr. Schumer that in Warren and Washington Counties this year, 152 people have been saved by the drug Narcan and 48 people have died of a drug overdose.

She said more funding for Narcan is needed, and the senator agreed to seek it.

He extended his hand to shake Ms. Livingston’s hand, but she responded, “we hug here,” and wrapped her arms around the Senate Minority Leader. 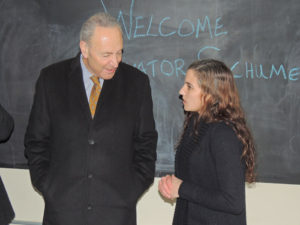 Sen. Schumer, smiling, said, “We’re not allowed to do that anymore.” It was one day after Senator Al Franken announced he would resign after several women claimed he sexually harassed them.

Also in the courthouse, in the new restaurant [forged], Sen. Schumer chatted with owner/chef AJ Richards and posed for photos with Democrat Assemblywoman Carrie Woerner.

Across Main Street, in the old bank building that attorney Bill Nikas owns and that Drake Hewitt is renovating with the intention to buy it, Sen. Schumer peppered him with questions about the brewery he wants to open, adding, “In the new tax bill, there’s a tax break for you.” 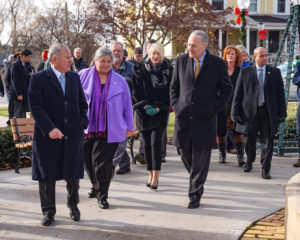 Joined by Mr. Nikas, whose Phoenix Rising non-profit is leading the move to revitalize downtown, Sen. Schumer walked through Juckett Park to the Strand Theater, where he spoke briefly before signing the guest book.

Sen. Schumer said he was visiting Hudson Falls as part of his promise to visit all 62 counties in the state every year.

Standing on the Strand stage, he said, “While Donald Trump did carry this county, so did I.”

He said, “The majority of Americans are troubled about the country. I am too.

“But here’s why I have optimism. Number one, our system of checks and balances is utterly amazing…and I have faith in the American people.” 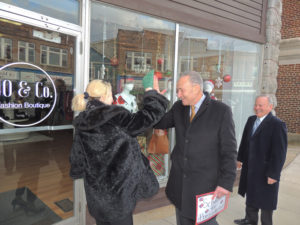