Sean Quirk intends to exit the bar business and turn King Neptune’s in Lake George Village into a five-room hotel that he hopes could charge upwards of $1,000 a night.

“I feel that because it’s lakefront and offering the dockage with a slip, I think there’s gonna be a draw,” Mr. Quirk told The Chronicle Tuesday afternoon.

“Then if they don’t have a boat, we’ll rent them a boat.” 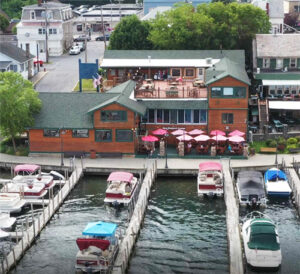 The Albany Business Review first broke the story of the hotel plan on Tuesday morning.

He said, “I’m hoping to get the approvals in October. November would start the construction, or December. I think we should have the four [of five] units going by June.” Jonathan Lapper of Bartlett Pontiff in Glens Falls is Mr. Quirk’s attorney. Andrew Allison at AJA in Glens Falls is the architect.

Neptune is adjacent to the Village Walkway, right next to the lake.

The Quirks will need a variance “to be able to enclose that lower patio” right next to the walkway. “That’s gonna be where the boat rental business will go from. The roof becomes the balcony for the two suites up in the dance floor area.”

He said the rooms will be “all glass, all windows, it will be nice.”

“Looking to sell was the easy thing,” he said, which was their initial plan. “If we didn’t sell, I wanted a condominium.”

Mr. Quirk said the construction to convert the bar to a hotel is “actually very minimal — framing in 11 bathrooms and five kitchens.” He said the project instead is “all mechanical” especially plumbing.

Of the five rooms, “The one is down in the lower bar. Two apartment suites — I’m gonna call them that — will be the dance floor divided in half.”

“We are looking at a self check-in, a machine. It’s all automated, a phone connectivity thing. Nice lobby with lockers. If you come early, you could store your stuff and still walk around. When you’re ready, your phone will access your door.”

He envisions “very minimal staffing. I do have a year-round maintenance man.”

As to the guest experience, Mr. Quirk said, “I used to worry about noise and everything but it seems not as loud. Things aren’t going as late as normal. That’s one of the reasons to get out of the bar business.”

He said closing Neptune’s — which formerly was a major live music venue in Lake George — “was a very difficult decision for my wife [Melissa] and I. We’ve done it, we really enjoyed it, we are gonna miss it. But it’s a quality of life choice.”

He said it’s a tough business. “I don’t wish it on my worst enemies.”

Asked how business was this summer, Mr. Quirk said, “I’ve heard other people say the word soft. It was soft. But compared to 2019 [before the post-Covid boom], it was right on target. That was a good year, 2019.

Chronicle Staffer Zander Frost writes: “I’d be in favor of a boutique hotel. I think anything that puts heads in beds in the village is a good thing,” Lake George Village Mayor Bob Blais said when The Chronicle called him for comment Tuesday. He said he wasn’t aware until we called of the Neptune hotel plan.

“We haven’t seen any plans,” he said. “And I can tell you that that’s about the third use now that I’ve heard. He changes quite often.”

The mayor said he was aware that Mr. Quirk was applying for a variance, “which he would need to build closer to the lakefront walkway because there is a setback required from the walkway.”

“I don’t think that the village necessarily would miss another nightclub,” he said. “Although Neptune’s was known for many years as having some of the best bands that we had in the village and that’s kind of been taken over by the Lake George Beach Club.”

The mayor said the Marriott was “controversial,” but “has made a tremendous difference in the entire atmosphere of the village, putting people in beds right on the main street, where they can walk to the restaurants and the shops and beach.”

As for possibly charging $1,000 a night, the mayor said, “Lake George Village has been known as a middle class town and a middle class resort. And if Sean believes that he can bring people that are willing to pay that kind of money into Lake George village, I say bring them on.”

“We need a little upgrade in our places,” he added. “We need less people that are interested in buying the Dilligaf T-shirts and more people that are willing to pay that kind of money for accommodation.”

“I don’t like those off color T-shirts, even though I respect his right to. Part of every single day I end up explaining to someone who’s visited Lake George about why Dilligaf can put those shirts in the window with the F word and all that kind of stuff. And I don’t appreciate having to spend my day — I’ve got better things to do than that.”