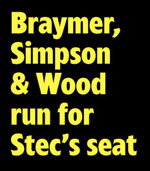 There’s a three-way race for the 114th District Assembly seat that Dan Stec is giving up to run for the State Senate seat being vacated by Betty Little. The candidates are:

Claudia Braymer, 40, a Democrat who is Glens Falls Ward 3 County Supervisor. She also has the Working Families line.

Matt Simpson, 53, a Republican who is Horicon Town Supervisor. He also has the Conservative and Independence lines.

Ms. Braymer, an attorney who has served on the Warren County Board of Supervisors since 2015, says, “I think I’ve shown I have an independent voice. I’m known for doing my homework, talking to colleagues and digging into the issues to make the best decision I can. I’m not always with the Democrats or Republicans; I have one of the most independent records up there at the County.”

Mr. Simpson has a small business background; he’s retired from Matt Simpson Drywall. In Horicon he served on the Planning Board, then as elected councilman, then elected supervisor, “now in my seventh year.” He is president of the Adirondack Association of Towns and Villages.

He says, “I’m very proud of my work in Horicon. Everyone’s interest has been represented. People are being heard. We have been under the tax cap every year. Taxes went down last year, while still meeting the needs of the community,” by consolidating some services with nearby towns.

Ms. Wood was Thurman Town Supervisor from November 2010 to January 2017. She resigned before her term ended, in part because she disagreed with the direction a newly elected Town Board took. “I decided, rather than struggle both with health issues and trying to do something against my morals, I made the extremely difficult decision ultimately to step down.”

Running on the new SAM Party, which she says is committed to “everyday working people,” Ms. Wood admits, “To be honest, my chances are pretty slim, running on a third party line.”

Were she to win, Ms. Wood says, “I would not be part of a majority party but practically speaking, I’ve got to vote one way or another, so there may be some room to exact leverage. They could ignore me entirely, but both sides are looking for votes. Ultimately I will vote the way the everyday people of my district expect. It might seem like throwing your vote away but I’m not running for a political party. I’m working for us. What we need now is experience and ability.”

Ms. Braymer says of her candidacy, “The State Assembly is not the same as running a local town or county. It’s a different power structure. I think I have stronger background skills that will give me some benefit. And I am in the majority party. That is not the only thing, but it is a consideration. Even Assemblyman Stec comes back and says how difficult it is for him sometimes to do things because he is in the minority.”

She says. “I have a strong background in legal skills and also a personalty that leads to being a strong advocate — I have a lot of passion and youthful energy, and a willingness to work hard for the district.”

Mr. Simpson says, “We need to refocus the unmanageable spending going on in Albany….We need balance at the State level. It’s obvious that things are not working in Albany now.”

On the prospect of being a Republican in the Democratic Assembly, he said, “You’ve got to focus on collaboration and consensus building. As Town Supervisor, that is your job…I view it as a great opportunity to take my experience there.”

Ms. Wood says, “I have the most experience of the candidates. As Town Supervisor, I am the only one who dealt with a natural disaster and expanded Internet connectivity in my community.”

Ms. Braymer said she grew up in Dillsburg in rural Pennsylvania near Gettysburg, graduated from Penn State University and Albany Law School and spent time in the Adirondacks as a child.

“I was looking for a firm that did environmental law and found that here and we fell in love with the area”. The firm was Caffry and Flower; she and her husband, an engineer, moved to the region in 2005. They have one child at Kensington Elementary and one at Glens Falls Middle School.

“My parents instilled in me the value of community service…I did Girls State in High School. That opened my eye to political service,” said Ms. Braymer.

Before first running for office in 2015, she says, “I was working as a volunteer for the PTA, in the school’s garden, weeding away, and I thought, I can do something more with the advocacy skills I have, to benefit our community.

“A lot of the Board is made up of retired people and I thought I could bring the voice of a working person and a mom, a woman on the board. Those were my motivating factors then and what drives me now, being that voice at the state level for the North Country.”

Mr. Simpson describes himself: “Born and raised in Warren County, my dad was a school teacher in Bolton, mom worked at Glens Falls Hospital.

“Saving money for college I learned how to do drywall and I enjoyed it so much I stated my own business…I’m married 29 years on November 8. We have two children, ages 24 and 22.”

He notes that he lived in Queensbury for 15 years before moving to Horicon.

“I was focused on building a life in the Adirondacks, raising a family and building a business and gradually got involved in politics through being involved in the community.”

As Supervisor, he got involved with the Adirondack Association of Towns and Villages, and is currently the Association’s elected president. “I just kept expanding my responsibilities,” he says. Issues he’s addressed include health and safety, Broadband and cellular service, fighting invasive species and pollution and road salt.

“All take great collaboration with many state agencies, industry and land use representatives,” Mr. Simpson says. “I’ve worked effectively with many downstate legislators, have great relationships and even have sought out connections, through the Association of Towns and Villages.

“You have to go the extra mile, meeting with downstate legislators on all of our issues, with majority members and also the governor’s office. I plan to continue that.”

Ms. Wood says, “I’ve lived in Thurman all of my life,” on the family farm where she grew up, she notes. She works in healthcare, currently remotely from home, as an accounts receivable specialist for a large business with an office in Glens Falls.

She previously ran for the Assembly seat when Teresa Sayward retired, and Dan Stec ultimately prevailed. “I’m interested now more than ever. I am familiar with the struggles of people going along every day. I punch a time clock, too.”

More on their priorities

Ms. Braymer says her target issues include affordable housing for working families and seniors, improving infrastructure including roads, bridges, sewer and water, as well as Broadband, something particularly clear to her, “from a younger generation perspective, not only for social media but for the education of our children, telehealth and business opportunities.”

On “protecting our natural resources,” says Ms. Braymer, “I have a demonstrated record of moving things forward in the county. On the issue of the Green Amendment [proposed for the state Constitution], Mr. Simpson was on the fence” before the Board passed it unanimously. “It makes me concerned about what would happen in Albany.”

Mr. Simpson sounds a dual theme. “The most important issue facing us is protecting the environment and building communities, bringing economic stability, bringing broadband. It’s all connected,” he said.

“We are losing population, facing high taxes. We need the infrastructure…We can do both — protect the environment and grow our communities’ cellular and broadband. We need to solve that, for the education and public safety aspect.”

Separately, “As a small business owner, I felt the burdens the state put upon me that made it difficult to keep building the business.”

Ms. Wood says, “Medicaid needs to be overhauled. There’s a huge gap in the system. It needs to be made more efficient, to streamline, and save the health care industry.”

“I received hazard mitigation funding, not only to do repairs but to make changes to be sure it didn’t happen again, and without raising taxes.” She said a $400,000 grant to build a temporary bridge during a separate project was shifted to permanently repair one of the damaged bridges that was not otherwise funded. “We had $7 million in damages, in a town with a $1.5 million budget. It was a tough time.”

Ms. Wood said she also won a state award in 2015 for her “White Space” program, expanding Internet, with a creative solution to bring service to 80 households by using old television station technologies, working with Google and Microsoft.

We asked the three Assembly candidates: What do you think of how Governor Cuomo has handled the coronavirus pandemic?

“It the middle of a pandemic, it’s easy to look back and say in hindsight that you could have done this or that thing better,” Mr. Simpson says. “Facing predictions of millions of people perishing, I’m not sure I would have reacted any differently than the Governor.

“There are always things that could be done better, but there is nothing worse than being in the middle of a crisis. So, the legislature allowed the governor to have total control for the fiscal year. I don’t agree with that. It should have been 30 days. Now we have the opportunity to look back and see that. Everybody needs accountability.”

Claudia Braymer says, “Early on in the pandemic I think he did a great job leading the state when so many things were unknown, and I think it’s neat that people all around the country were tuning in to his daily briefings.

“I do think it is time for the Legislature to assert control once again, and to get back to as normal functioning as we can. We need to allow some more regional control to deciding opening capacities and businesses that can open, either through the legislature or Regional Control Rooms. The 114th [Assembly District] needs to be allowed to have more control over itself.”

Evelyn Wood says, “I don’t disagree with everything he’s done. He’s probably dealing with a lot more than we see. I was wildly angry when he started putting Covid patients in nursing homes.”

She “questions” executive orders on the reporting of Covid-related health information of private patients.

“What are they doing with the information, and how is private health being protected?” she asks. “With a natural disaster you need to be clear and concise in what you are communicating and I think he has struggled with that.”

What do the 114th Assembly District candidates think of Dan Stec, the Assembly member they’re vying to replace (as Mr. Stec runs for the State Senate)?

Claudia Braymer said, “I don’t agree with him on a lot of policy issues, but I also can’t place blame on him for not being able to do more, given that he is in the minority.”

Matt Simpson said, “Dan Stec is very effective as a minority member. He has had more legislation passed than any other minority members and is doing a great job of bringing balance to the State Assembly.”

Evelyn Wood said, “He has been all right. I am disappointed he has not been more aggressive with Internet,” particularly fighting the fee for laying cable on state property, which she says amounts to a tax and is “a hang up” for Internet companies looking to expand access.