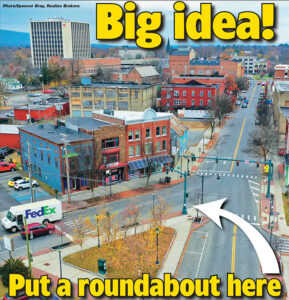 South Street resident: We don’t need a roundabout; do these things to help instead

As someone who has lived on South St. for the past nine years, I have to disagree with the Big Idea concept [Dec. 16 Chronicle] of the roundabout at South and Broad. Some folks may not remember, but about eight years ago the City spent a lot of money to re-make that intersection to reduce traffic onto South and School. The street was narrowed, the corner was built out and landscaped, and left turns were prohibited.

In spite of those changes, traffic on South at certain times of the day is more than the street is designed for.

I have not been able to figure out why heavy trucks are even allowed down it. Non-residents may not even realize how many 18-wheelers go down South.

A traffic circle would only add to the problem by encouraging traffic — a step backward. No one that lives on South St. wants it to become a “gateway” into the City. That’s what Hudson St. is designed and better suited for.

I propose that instead of using the money for the benefit of non-residents who drive through or go to the Farmers Market once a week, use it to encourage the residents and local businesses that are already on the Street (there are still a few, you should check them out).

Most non-residents may not realize that the City all but ignores South St. after Elm. The City should fix all the street lights that aren’t working. Put decorations and flowers past Elm St. Tend to the landscaping it paid for. Put trash bins past Elm St. Maintain the numerous properties it owns that stand derelict and unkempt (at least mow and plow!). Do what it can to encourage a grocery store at the old Rite Aid. Those would truly be Big Ideas for the folks that work and live on South St. and I would argue, the City in general.

With respect to the concept of putting a roundabout at the intersection of Broad, South and School, I don’t think this is necessary. From my perspective, there simply isn’t enough traffic on School or that small section of South to warrant a roundabout. In fact, I think South should be truncated at Broad and the short remaining leg be blocked off. This would eliminate the light at South and Broad and traffic would flow much better. I admit, my idea isn’t fully thought out, but it’s got some merit.

Now, as far as doing something that can help revitalize the South St. businesses, how about taking that abandoned drug store at that old intersection and making that into another parking lot. Now people have a place to park so they can access the businesses on South St. This dovetails nicely with my above idea.

In my opinion, a roundabout is desperately needed at the intersection of Glen and Quaker/Aviation. The current situation simply allows for congestion to build. A circle would eliminate this congestion.

And what about putting a smart light at the intersection of Quaker and Meadowbrook? The current traffic light pattern is maddening in the way that Quaker gets extended red lights while Meadowbrook is often empty.

Both of those intersections are very difficult, if not dangerous, for pedestrians to cross due to the traffic light pattern. The pedestrian lights and buttons are there, they just haven’t worked in years. The money required to provide this necessary functionality will hardly put a dent in the $10 million.

All the best and stay healthy,