The Rogers Island Visitor Center in Fort Edward said it cancelled the 18th Century Military Encampment & Battle Reenactment on September 24 and 25 due to “New York State’s new gun law that restricts the carrying of firearms in ‘sensitive places.’” 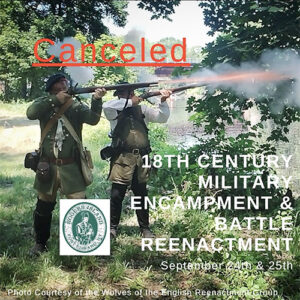 Rogers Island said that despite a Governor’s office statement that reenactments could still occur, “there is no specific exemption in the legislation for reenactments.”

The Visitor Center said the reenactors and the Center itself are “not comfortable moving forward with this year’s reenactment under the current law.”

State Senator Dan Stec said in a press release, “Because of the deeply flawed gun control laws passed by Governor Hochul and Democrat leaders, historical re-enactors and their organizers have to be worried about felony arrests and liability.”

He added, “It’s absurd. Since passage and taking effect, issue after issue has continued to arise.

“You can’t amend a law through press releases. If we want to seriously address public safety, we need to repeal these new gun control laws and enact common sense reforms that actually address criminal behavior.”

The Visitor Center said, “We are a small non-profit organization with a limited budget and the fall reenactment is our largest fundraising event of the year.

They said cancelling the event for a third straight year, “due to circumstances beyond our control, was extremely difficult and disappointing.”

They said they hope those interested will still visit the Center in the Fall. It’s open through Oct. 8, 10 a.m.-4 p.m, Tuesday-Saturday and 1-4 p.m. Sundays.

Beth Hill, the CEO and President of Fort Ticonderoga, told The Chronicle that last weekend’s historic reenactment at the fort took place as scheduled and the re-enactors did utilize their replica weapons.

Ms. Hill spoke with The Chronicle Saturday at the Sandy Hill Arts Center in Hudson Falls.

She said that when New York enacted its new law prohibiting firearms in many public places including parks and historic sites, Fort Ti had asked the governor’s office if its reenactments were exempted.

She said they were told they are, and that they proceeded without problem.

Ms. Hill was at the Sandy Hill Arts Center Saturday to accept a historic preservation award for Fort Ti’s restoration of The Pavilion, from the group Adirondack Architectural Heritage.

Among other honorees were Nettle Meadow Cheese, for reviving as its headquarters the Hitching Post in Lake Luzerne, and Hudson Falls’s Bill Nikas who turned the long idle Masonic building into the Sandy Hill Arts Center.