Glens Falls native Jimmer Fredette, playing now for Panathinaikos in Greece, where his coach is Rick Pitino, former New York Knicks, Louisville and Kentucky coach whose U.S. career stopped after he was fired for recruiting violations at Louisville. 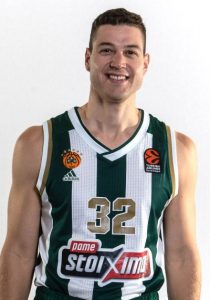 Fredette is averaging 15 points in 21 minutes through 23 games.

“I am so proud of Jimmer Fredette,” Pitino said following a recent win.

“He’s been knocked all his life about defense and his defense in the third quarter won us the game.”

After an earlier December game, Pitino said, “Jimmer has to learn a few things in order to become an effective EuroLeague player. In China, because the defense is not like the EuroLeague, you just can come off a screen and be open. He has to learn to dislodge his man, stand them up, fake one way and come off the other way.

“The second thing he has to learn to stop going one-on-one and pass the basketball in crucial situations. So he is going to grow because of these mistakes tonight and certainly I think the world of him as a basketball player, but he has to learn those two things in order to be effective in the EuroLeague.”