May 2, 2017 in Chronicle Perspectives

With millions of dollars flowing through Governor Andrew Cuomo’s competitive economic development initiatives, folks who make their living in the Capital Region through creative means decided they wanted to get a stab at those funds, too.

The Governor divided the state into several economic regions. Warren, Washington and Saratoga Counties are part of the Capital Region, which extends from through Albany, Schenectady and Troy, all the way south to Columbia and Greene Counties.

How does such a far-flung region make its case? With a common message, suggests Maureen Sager. She’s the project director of Upstate Alliance for the Creative Economy — also known as ACE.

Most recently here in Glens Falls, the organization put together a gathering of artistic freelancers, in conjunction with the Spark Freelancers Union. 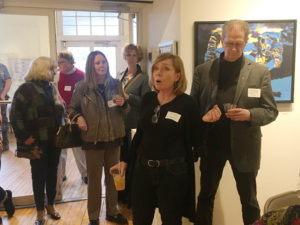 About 31,000 people are employed in so-called creative industries in the Capital Region, Ms. Sager said. “It’s traditional artists, which people understand, but also those that may not be considered arts, if you are only talking cultural activity.”

Creative Economy includes Web designers, architects — “even you, in the newspaper business, writing,” she tells a reporter.

“Think of your iPhone, or what Google or Apple does. That no longer fits into categories of business or art. There’s no way to segment the economy. Arts are where the money is, and where creativity is flowing, unlocking innovation.”

Can the definition get too broad?

“Well, there’s cheese made by local producers, versus a bar of Kraft cheese,” Ms. Sager explains. “These are creative people, with a product that is as much hand crafted as traditional arts.”

She said, “It’s the difference between a restaurant that goes farm to table. Not all restaurants are that. Not all manufacturers would fit, but Adirondack Studios (in Argyle) is in that, where creative content is central to its product.”

She said, “Jobs are the outcome anybody in public funding is looking for. The arts are not just nice, but important to the region. The creative economy is employing your friends and neighbors.”

Ms. Sager, who moved to Saratoga Springs to raise her young family after a career working at MTV Industries, among others, was one of the original people who put together the ACE initiative, about four years ago. Tom Lloyd of Adirondack Studios, which fabricates theatrical scenery and design elements for such diverse clients as amusement parks and grocery stores, was another.

“It’s about the intersection of creative arts and economy,” Ms. Sager asserts. “There he is, Tom, with 130 jobs in the middle of Argyle, all based on creative work.” Others in on the ground level included such heavy hitters as Philip Morris of Proctors Theater in Schenectady.

“The governor wants all of us to work regionally,” Ms. Sager says. “The creative industries have been much more inclusive of people who had never worked together. If it were just traditional arts, Tom Lloyd would never have been called to the table, or someone like the architectural firms. There was no call for a table like this before.”

The first thing the group did was commission the report that asserts those 31,000 jobs in the creative industries — a way of earning your place in line as the Governor’s office considers competitive funding through its Upstate Revitalization Initiative, Regional Economic Development Councils, Consolidated Funding Applications — an alphabet soup of opportunities, with real money at stake.

“The report was in 2014 and it is still something I refer to every day,” Ms. Sager asserts. “The findings were that robust and enlightening.”

Besides advocating for state funds, another “huge” initiative, she said, was a project called “Breathing Lights.” 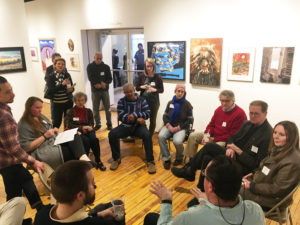 Ms. Sager explained, “The Bloomberg Foundation had put out a call for public art projects that would impact cities of 30,000 or more population. One of the original ACE founders, from MVP Health Care, was inspired by how we all worked together.”

She called on the mayors of Albany, Schenectady and Troy to suggest — “none of them alone was going to get that money, but I bet we have a chance to win if we do it together.”

It worked. Of 300 applications country-wide, the Capital Region received the $1 million. The project was to put artistic light shows into the windows of vacant buildings in all three cities, with the intent to highlight issues of downtown blight. It went live in October 2016.

“It was a massive undertaking,” Ms. Sager says. It was also an economic boon, calling for the design and manufacture of the physical lights, construction of the exhibits, hiring and training neighborhood interpretive guides, putting on events in conjunction with the show.

Meanwhile, Ms. Sager said, “We were starting to feel, we wanted to go a little faster with all this.”

She says, “Everyone involved was doing it on the side. There hadn’t been a chance to put the full force of everything into it. We were holding these networking events around the region and they were weirdly well attended, 100s of people showing up.”

She says, “Once you’re engaging people like that, we couldn’t let that go.”

So, together, the original founders pooled their money and hired Ms. Sager. (She is also the director of the Spring Street Gallery in Saratoga Springs.)

Glens Falls gets in on it

Earlier this month, on April 5, ACE held its freelancers gathering at the Shirt Factory in Glens Falls. The event included time to socialize and network, as well as breakout guided discussion circles, this time on the topic of project management. About 40 people attended, locals but also several, Ms. Sager noted, from closer to Albany.

The first such event came about when their research showed as many as 14,000 creative arts freelancers in the region.

“We should throw a party for them,” Ms. Sager said they decided. “We thought we’d get a dozen or two people, and then 150 showed up. They were thrilled to be there, exchanging business cards, talking about their issues” — in that case, taxes.

In March, ACE brought its “Inside Business” series to tour Adirondack Studios, “to show that side of the creative industries,” Ms. Sager said.

They put their money where their economic impact is, too, she notes. Besides paying her as director, when they hold an event such as the freelancers gathering, “We pay everyone,” Ms. Sager says, from the musicians to the photographer. “We think that’s really important. There’s a significant freelancer population in the region, so we try to pay them. No one’s getting rich, but we are self-supporting. That’s the point.”

Ms. Sager asserts, “this is all still very new. I invite your readers to send ideas for how we can better include Washington and Warren Counties.

The next Spark Freelancer event is this Wednesday, May 3, from 5:30 to 7:30 p.m. at The Albany Barn, an artists incubator of studios and residences.

Find other upcoming events and more about ACE online at UpstateACE.org.

ACE Maureen Sager 2017-05-02
Ed Deso
Share !
Previous: Aeon Nexus says it employs 14 in GF, so most of NY loan forgiven
Next: Our May 4 issue
Copyright © 2020 Lone Oak Publishing Co., Inc. All Rights Reserved. Thank you for reading The Chronicle!