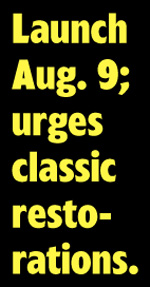 Elizabeth Finkelstein says that “even as a two-year-old I understood the magic of old houses.”

Her parents, Dr. Joel and Gail Solomon, raised their family in one of the most historic homes in Queensbury, on Chestnut Ridge Road. Called the Nehemiah Wing house, it was named after one of the 19th century owners, a descendant of Abraham Wing, a founder of Glens Falls.

The original clapboard part of the home is believed to date to the 18th century. The brick addition was constructed in 1852.

Ms. Finkelstein’s appreciation of old homes has turned into a lifelong passion for her and her husband Ethan; an Instagram account with 1.6-million followers; and now a TV show Cheap Old Houses that will debut on Monday, Aug. 9, on HGTV and DiscoveryPlus.

During that time, she became fascinated with and studied the history of New York City, volunteered with various preservation organizations, became a licensed tour guide, and then, earned a graduate degree in historic preservation from Pratt Institute.

She and her husband Ethan, who runs a digital design agency and also has a passion for old houses, understood that home ownership in many cities and suburbs has become an unattainable goal for many people, especially younger people who carry large college debt.

They decided they wanted to spread the word about the huge number of affordable old houses for sale outside of our major cities and suburbs, and encourage people to buy older homes, and restore and preserve them.

Their first step, in 2013, was to start CIRCA, a real estate website where any owner or agent can list a historic house for sale. It’s found at circaoldhouses.com.

Ms. Finkelstein says she was particularly inspired to create the site when her parents were looking to sell their historic home and they realized that appraisers tend to not properly “quantify” historic character. She felt there was a gap in the way people talked about real estate.

“We started CIRCA to bring an awareness to people who were already sold on why historic houses are special,” she says.

Ms. Finkelstein admits to having a “soft spot” for “fixer-uppers.”

She said when she started posting houses on CIRCA, she’d list 10 homes priced at under $50,000 that were “really special.”

The couple continues to publish listings of historic homes in a broader price range on the CIRCA website, and has even partnered with the National Trust for Historic Preservation, which lists its historic properties for sale across the country.

After the posts of cheap houses on CIRCA went “viral,” the couple set up an Instagram account, @cheapoldhouses, highlighting property “bargains” available for under $150,000.

“There are so many places in this country that have these beautiful homes waiting to be nurtured and loved,” says Ms. Finkelstein. She says many young people feel home ownership is now a “pipe dream,” but once you start looking in smaller towns and more rural areas, there’s a wealth of affordable old house inventory.

Ms. Finkelstein says the Instagram site in particular is geared towards millennials, who she says don’t want to live in “cookie cutter” houses, but seek unique places with character. She also believes they want to “use their hands” and “reuse what’s already there.”

The pandemic stoked interest. Ms. Finkelstein says their Instagram account went from gaining 10,000 or so followers a week to between 25,000 and 30,000 at the start of the pandemic. The weekly numbers have stabilized somewhat.

The couple has filmed 10 episodes of the show, to make up one season. They visited nine states, traveling through towns most people don’t visit when they travel. “I feel like we really saw this country,” she says.

Each episode features the couple visiting two “cheap old houses,” and also a segment with someone who has actually purchased one of the “cheap” houses and fixed it up.

They say they know over one hundred people who have bought houses that appeared on their Instagram feed and then restored them.

Cheap Old Houses, Elizabeth and Ethan Finkelstein’s new show, will debut on Monday, Aug. 9, on both HGTV and Discovery Plus.

Cable network HGTV (Channel 41 on Spectrum) will run two episodes back-to-back that night, at 9 p.m. and 9:30.

Discovery Plus will stream the first four episodes on Aug. 9, then make two additional new episodes available each week through August 30.

The first episode features an 1850 brick former schoolhouse in the Washington County Town of Greenwich.

The Finkelsteins interview a father and daughter team who purchased it for just $15,000 and have restored it into a charming living space. And, in a lovely twist, the daughter’s grandfather attended school in the building.

Also featured in the debut are a large, 1900 Victorian in Amsterdam, west of Schenectady, and a 1850 well-cared for Italianate home in Fort Plain, west of Amsterdam.

In the second episode, the couple heads to Peoria, Illinois.

What’s next? Ms. Finkelstein says they hope the network will green light a second season. They are also exploring all the possibilities, looking to do “something that’s right for our lifestyle and brand.”

his is “our ultimate passion,” Ms. Finkelstein says. “It’s what we believe we were put on this earth to do.”