Congresswoman Elise Stefanik offered The Chronicle a press availability Saturday at the Cool Insuring Arena in Glens Falls, where she was helping conduct a hockey clinic. Chronicle editor Mark Frost wasn’t available to attend the interview, but our News Editor Gordon Woodworth asked Mark’s questions and one of his own.

Mark Frost: President Trump said at the prayer breakfast: “I don’t like people who use their faith as justification for doing what they know is wrong.” When Mitt Romney voted to convict the President, do you think Sen. Romney thought he was doing right or that he thought he was doing wrong?

Rep. Stefanik: I disagreed with Senator Romney’s vote. I think every elected official makes their own decisions based upon the evidence they have been presented with, and I disagree with the position he took. I took the vote I did in the House, which was against impeachment and removal of the president, but I’m not going to attack other people for their votes.

Mark: Should Sen. Romney be ousted from the Republican Party? (as some critics have suggested).

Rep. Stefanik: No. He represents the citizens of Utah. The voters of Utah are going to make that determination.

Mark: Should Mitt Romney resign, as Laura Ingraham called for?

Mark: Do you agree with Lou Dobbs that Romney is now linked to “Judas, Brutus, Benedict Arnold forever”?

Mark: Does a President have any responsibility to seek common ground with people he disagrees with, to try to be a healing force instead of only attacking those who disagree with him? 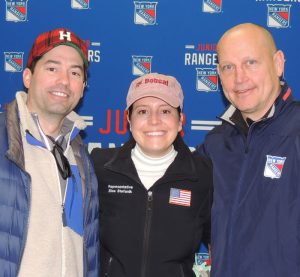 Mark: Who do you think the Democratic nominee for President will be?

Rep. Stefanik: “Well, as The Chronicle knows, I’ve been wrong (laughs). Elizabeth Warren [her prior prediction to us as the nominee] did not do too well. So, I don’t know…I don’t know who is going to be the Democratic nominee. I think there are issues within the Democratic party, sort of the more progressive Sanders wing vs., I guess, the non-Democratic Socialists, although they are all running to the left. So I don’t know, but I think President Trump is in a good position to beat all of them.

Mark: Will the Republicans keep control of the U.S. Senate in the election?

Rep. Stefanik: I believe so, and I think we have an opportunity to regain the House. I think many of the districts that Republicans lost in the last cycle, President Trump overwhelmingly won, and the electorate in presidential years shifts with the number of people that turn out.

Mark: Can you provide proof that [Rep.] Adam Schiff was working with the “whistleblower”?

Gordon Woodworth: What did you think of President Trump awarding the Presidential Medal of Freedom to Rush Limbaugh?

Rep. Stefanik: I think it was an important moment for Rush. There are millions of listeners across the country who have listened to his radio show. I think the conservatives were very excited about that.

The Presidential Medal of Freedom is a big deal, and I was glad he has awarded it to all sorts of people since he’s been in office. Sitting in the Chamber at the State of the Union, people were applauding and people were clapping, so clearly he has a following.

There’s a local constituent who is facing the challenge of lung cancer, and I’ve been working very closely with her, and I’m actually co-chair of the lung cancer caucus, so we’re trying to make sure those investments are there for research and development to find a cure.