If you sing in a choir or choral group, or are even thinking about trying it, I urge you to read Imperfect Harmony by Stacy Horn (2013, Algonquin Books of Chapel Hill).

Part memoir and part history of group singing, the book explores how and why singing in a group can be a route to happiness.

Ms. Horn relates her own experience as an amateur singer for more than 30 years in New York City’s 140-plus member Choral Society of Grace Church. It’s a community (amateur) group that performs major sacred choral works.

Ms. Horn is the opposite of a diva. She is self-deprecating about her own singing ability, and writes of her fear while auditioning for the Choral Society, when she practically begged the director to let her in. This was at a low point in her life and the only thing she could think of that might bring her out of her doldrums was singing. 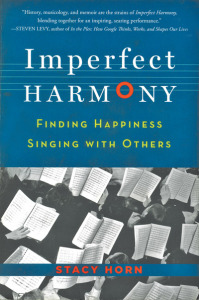 Any non-professional choral singer who for the first time is handed a score like Handel’s Messiah and is expected to start singing those runs, albeit with a bunch of other people, will value Ms. Horn’s frank assessment of her panic.

In my case, the first large-scale choral piece I attempted was Bach’s Mass in B Minor, in Latin, no less, around the same time Ms. Horn joined her Choral Society.

I could definitely relate.

She also writes about the seemingly mundane aspects of group singing — politics, if you will — such as seating arrangements and why it matters, which will strike a chord with many choristers (pun intended).

Ms. Horn writes about the first time her conductor asked her to sing second soprano instead of her long-time, regular first (the highest choral part). She was terrified at the prospect of singing a harmonic part, but once she did, she felt such joy that she describes it like falling in love for the first time.

Altos in particular will enjoy her observations about first sopranos (please forgive me, soprano choir friends): “As far as they were concerned the rest of us sang some insignificant notes that they passed by on their way to the beautiful, soaring top. Why did all the other people in the choir even bother coming?”

Using major choral pieces she has sung as the framework, Ms. Horn covers topics as diverse as as how choruses evolved from monastic chanting, and how over 100 voices singing pppp (extremely soft, or extreme piano) in Leonard Bernstein’s Chichester Psalms, is far more intense and commanding than if those same voices were shouting.

She also gets into some of the neurological research about what music and singing does to the brain. Turns out, singing in a group gives you an endorphin high. No wonder it makes you feel so good.

I’m not alone in loving this book. It has been circulating in some circles locally. I loaned my copy to singing friend Nancy, who e-mailed me: “I inhaled Imperfect Harmony, occasionally going to my iPad to hear some music I did or didn’t know. The author’s excitement about choral singing, the friendships and joy in hearing how the parts went together and the information about music and composers was fascinating.”