Part one: Eateries carry on carry out

General manager Tony Grecco cried just for a second during the phone interview, talking of long-time staff he’s had to lay off due to the coronavirus pandemic.

Mr. Grecco said, “I’m here 32 years myself. A lot have been here for 20 years, the core have all been over 10 years. It’s not just a job…We do a lot of group activities, we were going to do Bowl for Kids this weekend. I don’t do social media, but I think they are lucky now that there is a way they can still connect” 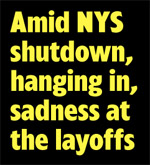 He said they did 100 dinners, versus the typical 500 last Saturday. “I never thought I’d be happy doing 100 on a Saturday night.”

The first week, they continued their self-serve salad bar for take-out customers. “People still wanted to come in and make their salad, believe it or not, and we still had product.” That’s since stopped.

Mr. Grecco said, “We never really did deliveries or take out before. But we are trying it. Trying to do family dinner specials each night, chicken, gravy, chowder and bread, $12 for an individual meal.

“We are hoping this weekend to offer prime rib dinners. A lot of people call about it, but it’s something that cooks all day and it’s wasted if they don’t order it.”

Monday was their first day signed up on the Door Dash delivery app. “We will give it a go as long as possible. We would like to stay open to give at least a few employees something.”

Mr. Grecco said, “At first, it’s surreal. Is this really happening. This is the kind of thing it’s always another country, across the world. Some of my people are really busy at home with their kids, and others are single and don’t know what do to.”

“It’s been somber. Now people are adapting and accepting, adjusting. The mood has changed to: what do I do? Try to have a routine….

“Let’s hope we are open in May. This is not a two-week thing. I have customers asking what we are doing for Easter. It’s hard to plan that far ahead and it’s only three weeks.”

Rebecca Newell-Butters, chef co-owner with her chef husband Steve at Morgan and Co., said, “Everybody is trying to get through it and one way is to add some normalcy by having a nice meal. The response from the community has been awesome. We’ve had regulars and a lot of new customers come in too.

“We have a table set up. People can do curbside, order and pay over the phone and we’ll bring it to the car, or delivery….We are making lasagna dinners, with a bottle of wine, or a date night dinner.”

She says they sold about 30 corned beef dinners to go over St. Patrick’s weekend.

“We’ve sold a ton of tofu bowls. If there’s an item you’ve had that you want, I’m happy to cook it with some notice.” Of the discounted family meals, she says, “It’s cheaper than any restaurant. Cheaper than buying the ingredients yourself.”

Ms. Newell-Butters said people are ordering wine, beer and even specialty cocktails to go, allowable under the new regulations. “We’ve sold a lot of espresso martinis,” she says. “They’re excited to come and see us. That’s what we do. We are hosts. It’s nice we can still contribute to people’s lives.”

They’ve let go about 20 people, she said, down to four — herself, her husband, a chef and the general manager.

They are also offering free lunches to go for school children, “just tell us how many kids. We’re doing pasta with butter, chicken fingers, and we don’t ask questions.” They’re doing “about 10 a day,” she said.

At [farmacy] Restobar, Christina Richards says she and her chef husband AJ “are trying to stay focused, stay healthy, stay positive and reduce expenses. People are actually surprisingly upbeat, thankful, hopeful, and supportive. Everyone is being kind, respectful of spatial awareness.

“Hey, we are still waving as people walk by, so if nothing else, providing some cheer and positivity.”

She said, “The transition was rather seamless. We had been watching the news, saw the changes in Chicago and were already preparing for it….We are operating at less than the [state’s] suggested 25% employees. We used this time to empty out the restaurant and clean and sterilize everything as well as we do it many times a day.”

“We have only one employee that is ‘interacting,’ for lack of a better word, with our guests and then the chefs stay to themselves cooking and preparing.”

Most customers are “coming in just inside the door to retrieve their items. We have it blocked off so you cannot advance any further. People want to see the chefs, they want to say thank you, they want to share words of positivity.”

Mrs. Richards said they offer free meals to laid-off staff members. The typical 15-20 employees is are now at three. They’ve offered some the option to do delivery.

She said, “People are ordering a lot of meat items, burgers, steaks, etc. We suspect that because there is a ‘shortage’ at times in the stores that people who can are getting creative with ways to obtain it.”

She said, “If people keep supporting the small businesses, even in the smallest ways possible we can at least keep our heads above water. We have a slightly unique situation because we are chef owned and operated. We do not need to pay a chef to keep us going, I can take on a bulk of the work, remove myself from payroll to reduce expenses and keep the doors open.”

“Who we do have working are coming in every day, positive attitudes, and working hard. I honestly feel that even if I said I can not pay you anymore that they would still show up and work just as hard next to me.”

Share
Previous Part two: Eateries carry on carry out
Next Our March 26 issue