Pam Fisher aims to get ‘Loopy’ at the Wood Theater

By Cathy DeDe, Chronicle Managing Editor
“I am tired of having to walk into venues and …

“I am tired of having to walk into venues and declare my disability,” says Pam Fisher of Glens Falls.

She’s launched a capital campaign, in conjunction with the Adirondack Theatre Festival and with the approval of the Wood Theater, to raise the $16,000 needed to install state-of-the-art “looping” technology at the Wood Theater in Glens Falls. 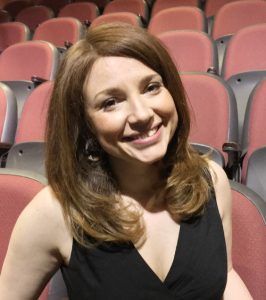 Pam Fisher of Glens Falls seeks $16,000 to install state-of-the-art inclusive “Looping” technology at the Wood Theater to assist hearing-impaired patrons — including herself . She started the capital campaign as part of the MBA program she just completed at U Albany. Chronicle photo/Cathy DeDe

As a hearing-impaired person, a member of the ATF board, and parent to a theatrical daughter, Mrs. Fisher, says, “I’m at the Wood Theater a lot.”

Even with traditional assisted-listening headphones, “It’s very challenging for me to understand lyrics or actors’ lines, particularly when there is music playing.”

Loop technology is different. It connects directly in the audience member’s hearing aid, or — in Mrs. Fisher’s case — her Cochlear implant. It’s all wireless, through what are called telecoil functions.

The “loop” picks up signals from the stage and sends them to the audience member’s hearing aid or cochlear implant, with no additional device required. It eliminates background noise and is digitally customized to each listener’s unique hearing instrument, Mrs. Fisher says.

“A loop allows most hearing aid and cochlear implant users the ability to access technology, understand better, and just be able to walk in the theater with their family and friends like everyone else,” Mrs. Fisher says.

It’s discreet, doesn’t require using headphones used previously by someone else, and it automatically accommodates all users’ unique hearing systems simultaneously with one set of equipment.

Mrs. Fisher recounts a recent trip to Boston, when she considered attending a live show, but the barriers to getting a listening device were intrusive, she said.

With built-in looping, “There is no need to arrive early, stand in line, complete paperwork, troubleshoot equipment, or wait to return equipment after a performance” — as she’s often encountered, she says.

“I’ve been in the position, more than once, where I get to my seat and the equipment doesn’t work. Most venues have these devices because they are ‘checking off the box’ for accessibility, but very rarely are staff trained to know how to troubleshoot equipment when it malfunctions.

“I’ve missed beginnings of shows trying to get assistive equipment to work properly. It’s frustrating. I literally have to pump myself up before requesting accommodations because it’s hard, on me and my family.

“It requires planning and more time and having the nerve to admit you need help. That’s not easy. And then once you’ve voiced what you need and it doesn’t work—it’s hard. It’s stressful.”

The fund-raiser came about as part of the final course of Mrs. Fisher’s MBA program at UAlbany, on Creativity and Entrepreneurship. The charge was “to raise money for charity through an entrepreneurial effort” — $500 was suggested.

“I was going to raise funds for the loop anyway, so I presented the idea to my classmates,” Mrs. Fisher said.

“They’ve seen how challenging it’s been for me to hear and understand in our classrooms, so they wanted to help, and they know how passionate I am about theatre and Glens Falls.”

They first sold greeting cards made by Pam’s sister, who is also hearing impaired.

Mrs. Fisher earned her MBA this month, but the campaign continues, now as a straight-out effort on Go Fund Me and Facebook.

The goal is to have the loop installed by the fall. “We’ll do it,” Mrs. Fisher asserts.

Mrs. Fisher has been frank about her struggles with hearing loss since she received her first Cochlear implant in 2012.

For 22 years prior, she hid her hearing loss she recalls. Even now, she says, her outward positivity sometimes belies her frustrations.

Still Mrs. Fisher is undaunted. She’s being featured in a short promotional film by the company that makes her implants.

Separately but not unrelated, just last week she met her hero, Oprah Winfrey, who was at Skidmore College where Mrs. Fisher works. “We talked,” she says, “and hugged.” Meeting Oprah “was confirmation to keep dreaming and putting myself out there for positive change,” she says.