More than halfway through an 8,000-mile, 2½-year international horseback ride, a chance meeting has resulted in Bernice Ende and her two horses spending the winter in Fort Edward.

“It’s rather serendipitous to stay in an old historic feed store, the Nicholson Feed Store,” Ms. Ende told The Chronicle. “Fort Edward is so rich in history. You people are very serious about history.”

Ms. Ende, 60, who calls herself “the old lady long rider,” is staying with Darleen Lundgren. They met by chance on a Sunday morning in early September.

“I was riding by and noticed her beautiful yard, and she was sitting on the porch,” Ms. Ende said. “I told her she had a beautiful yard and she asked me if I was exercising my horses. 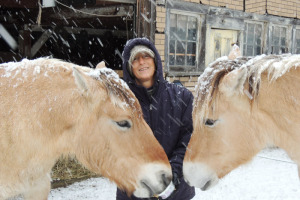 Bernice Ende with her Norwegian Fjord horses Essie Pearl (left) and Montana Spirit in the Fort Edward corral where they will rest for the winter before completing a journey across North America. Chronicle photo/Gordon Woodworth

“I looked up and here comes Darlene around the corner. I introduced myself and told her I was coming back through after going to Maine, and she said, ‘Why don’t you stay with me?’ 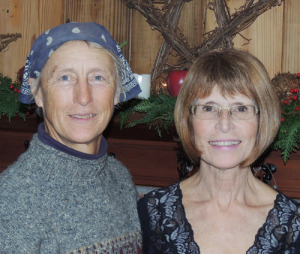 “We exchanged contact information, and the whole ride to Maine and back to here, I was thinking, ‘I’m going back to Fort Edward.’

“There’s a corral out back, I buy hay from the neighbors, and Darlene is taking me places to meet people. I’ve never wintered in a town like this. It’s usually in the middle of a desert or in the mountains somewhere.” 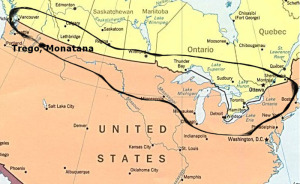 A map of her trip, which she hopes to finish by the end of 2015 back in Montana.

Ms. Ende says she has covered 25,000 miles on horseback over the last 10 years, traveling the country. She gives talks and slideshow presentations and “I play the piano. I’ve got to find a place to play the piano.”

She said she taught classical ballet for 25 years in northwest Montana, her home base where she has a log cabin and 20 acres up in the mountains. So far on this trip she has ridden 2,450 miles, averaging 100 to 150 miles a week.

She travels back roads mostly, and doesn’t carry a cellphone. “It’s a false sense of security,” she said. “I just can’t do it.”

She said she makes enough money selling DVDs at her talks, and “some donations from people who ride v

icariously through me. Schools follow me on the web, and everything I use on the road is from sponsors — my saddles, hats, boots, vitamins.”

The self-described “Minnesota dairy girl” said she’d never been to New England and had “never seen fall colors. I always wanted to meet people in the Northeast. I knew the people are different here.

“And the colors this fall? It’s as if Picasso painted a head of broccoli.”

Says her first ride ‘was so awful’

She said when she left on her first ride 10 years ago, she cried.

“I wanted to discover how to live differently, but it was so awful. I rode into a nightmare every night,” Ms. Ende said. “A thousand miles in, I hit the wall. I couldn’t go anymore. My dog had sore feet and my horse had sores, but a rancher in Wyoming got me going again. He put me back together again.

“I finished the ride, and for the first time felt like I had climbed into my own skin.”

Ten years later, she can’t imagine any other life. “It’s what I do,” she said. “I’ve stepped into a different world. There’s something about taking down the walls in your life, things that make you secure. Out on the road, they are all gone. Life is so raw and immediate. Many nights I’m in a ditch.

“Every day is so interesting because everything is so uncertain. There is a surprise around every corner. You learn to roll with the punches.

“I do my own horseshoeing and vet work. I’ve learned how to forage for food. I repair saddles. I like to say I’m independently poor. I find it so interesting learning to do things without spending money, and I have so much fun doing it.”

One example is when she and her horses were being swarmed by bugs.

“I found some light cotton bedsheets in a second-hand store, and would put them over the horses’ backs. When they started to rip, I’d get new ones.” 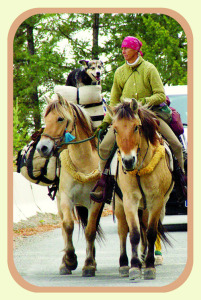 Bernice Ende on the road with her horses and her dog, Claire. Bernice said of the dog, “after 17,000 miles, she has retired.” Photo provided

‘Hundreds of spirits in my saddle’

Ms. Ende says, “I so love my life now. It’s the surprise of everything. I feel like I am the luckiest woman in the world. I don’t have a lot and I so appreciate people, and simple things, like dandelion greens for supper and clean water for a bath in a stock tank.”

She said “thousands of people have told me that I am doing something they always wanted to do. They are riding vicariously through me. There are hundreds of spirits in my saddle.”

She said this ride “offers testimony to the freedoms we enjoy in this country. I’m doing it to encourage women to follow their dreams.”

She has visited Susan B. Anthony’s birthplace in Rochester, and the Elizabeth Cady Stanton House in Seneca Falls. 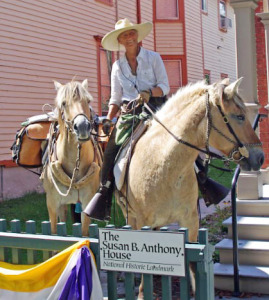 At the Susan B. Anthony House in Rochester, N.Y. Photo provided

In Maine, she went to the Rachel Carson Wildlife Refuge.

Ms. Cady said she’ll be in Fort Edward until the spring, leaving by April 1st.

Until April, Ms. Lundgren says, “I get to hear her stories. It’s just awesome. She’s making my winter so enjoyable, full of fun and adventure.”