New book on John Apperson coming in May

Ellen Apperson Brown of Virginia has written a book — John Apperson’s Lake George — about her great-uncle, the pioneering Lake George environmentalist. It’s coming out in May.

Somewhat surprising even to Ms. Brown — “funny,” she calls it — is that the book she said she has long dreamed of writing finally got picked up by Arcadia Publishing, best known for its Images of America series of picture-heavy “postcard” books about local history.

Who was John Apperson? In the early 1900s, the Virginia native was a rising young GE engineer, living in Schenectady, who discovered Lake George and beyond.

“He was an avid outdoorsman who loved hiking and skiing, winter sports in the Adirondacks, who fell in love with island camping at Lake George,” Ms. Brown says.

“That led him to become a champion of the islands, a preservationist and leader of the protectionist movement to preserve and protect Lake George.”

Apperson famously pioneered protecting the Lake George islands from erosion — Dome Island, particularly — by shoring up the outer edges with rocks. The process, known as riprapping, he’d learned during his summers as a laborer-foreman working on railroad beds.

Early on, he lured friends from Schenectady to outings on the lake, where the “recreation” included the grueling work of hauling rocks and boulders through water or over ice, depending on the season, to save the islands.

Ms. Brown said he also fought logging practices of the paper industry, which she said controlled water levels through dams to produce electricity and float logs down the lake, flooding islands, exacerbating erosion.

Apperson lobbied against legislation that would have opened the Adirondacks to more logging, which he said would waken the Forever Wild provision that created the Adirondack Park.

He and several friends purchased property at Northwest Bay and Turtle Bay to limit logging companies’ access to the Lake. That property is where Ms. Brown and the extended Apperson family gathered for years. Subsequent generations moved away, and they sold off the property.

Ms. Brown said, “He believed that all the islands, particularly in the central area from Tongue Mountain through the Narrows should be protected,” in part, she said, for economic reasons, “because people will come to see Lake George, if there’s something to see.”

She said Apperson was an effective strategist. He took up photography to make his point, befriended higher-ups at General Electric who could wield connections to help the cause (once he’d won them over by bringing them along to Lake George) and connected with a writer friend at the Nature Conservancy’s influential Conservationist magazine who promoted his cause.

His environmental efforts were legend. Ms. Brown notes the book Lake George Reflections by Frank Leonbruno, who worked for 40 years on the lake as a state ranger and eventually as superintendent of operations on the lake for the state.

Mr. Leonbruno writes that Mr. Apperson “probably did more to preserve the lake as we know it than any other individual.”

Apperson was characterized by some as “a loner, feisty or even ornery,” with “a reputation as intimidating, such a watchdog.”

Ms. Brown suggests, “That’s true, but in the early days he must have been a real Pied Piper, enthusiastic, rambunctious, getting scores of people out making skate sails, getting over 300 people visiting the Dollar Islands. He was obviously someone with so much enthusiasm and passion for what he loved, and brought a lot of people along.”

Ms. Brown says she knew her unmarried uncle as “Appy” who himself was one of 11 children. Her father, John Apperson III, was Appy’s nephew. The elder Apperson’s influence hit home. Ms. Brown says: “Lake George was big in our family, always talking about what was to be done for Lake George, to help Appy.”

Still, Ms. Brown said prospective publishers told her again and again that though Apperson was an interesting character, he was “too obscure” to sell books.

“It’s been a Catch-22,” she says. “The few people who know and appreciate what John Apperson did are not in a position to give a hand up.”

When Apperson died in 1963, his correspondence, many photographs and other papers were left to an entity that eventually became the Adirondack Research Library in Niskayuna — which also has fellow activist Paul Schaefer’s extensive collection of Adirondack books.

Originally a project of the Association for the Protection of the Adirondacks, in 2011 Union College took it over, renamed it the Kelly Adirondack Center, archived the collection and created a database that Mr. Brown says greatly accelerated her research.

Meanwhile, she began publishing articles about Apperson in the Adirondack Explorer, Adirondack Almanac, the Lake George Mirror and other regional outlets.

In December 2015, she attended a conference at the University at Albany to give a brief lecture on researching history. “I drove 900 miles from Virginia to give a 20-minute talk,” she laughs — but that also got her the connection with Arcadia and Images of America.

Months later, she was poring through Apperson’s photographs and papers — “10 scheduled hours at Union College with two archivists,” she recounts — who helped her select 200 photos they deemed “most interesting” for the project. She also drew from her own considerable collection of her great-uncle’s photographs.

“Who would have thought that my biography of my great-uncle that I’ve been working on for so many years would wind up being a fluffy postcard book?” Ms. Brown says.

“But it’s perfect. No one wants to read 500 pages anymore. This formula provided the chance to tell all the right parts of the story in the captions, and by doing that to teach about this hidden chapter of New York’s environmental history.”

Ellen Apperson Brown’s book, John Apperson’s Lake George, is due for release on May 15. The next week, Ms. Brown plans to be in the area for several book-launch events, through the Chapman Historical Museum and other venues. 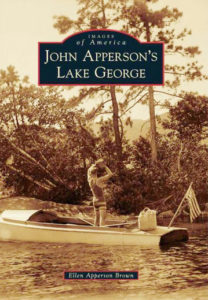 In July she’ll do extensive appearances, including a talk at the Darrin Freshwater Institute in Bolton Landing.

Ms. Brown will be a featured author at the Glens Falls Chronicle Book Fair at the Queensbury Hotel on Sunday, Nov. 5.