Los Angeles comedian Jonah Ray plays the Comedy After Dark series at The Park Theater in Glens Falls on Friday, Jan. 24, at 8 p.m. 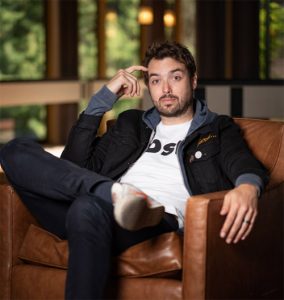 Besides his Comedy Central shows, podcasts, TV writing gigs, stand-up career and other outings, Mr. Ray is the host of the rebooted mega-cult favorite Mystery Science Theater 3000 on Netflix.

Premise of the odd, odd series, originally launched by Joel Hodgson in 1988: “Forced by evil scientists to watch bad ‘B’ movies until he breaks, a host and a bunch of captive robots comment on the films to keep sane.”

Signature scene: Silhouettes of the robots and host on the backdrop of a black and white stinker, their smart-aleck commentary ongoing throughout the movie.

Mr. Ray spoke Monday night with The Chronicle by phone from LA, having just returned from the week-long San Francisco Sketch Fest.

He says, “I was always interested in comedy and acting. When I came to L.A. I didn’t know how to get into the business. It was like a building with no doors. I managed to find a tine crawl space on the side, lifted the latch and got in.

That was open mic shows he says, making connections that led from one gig to another.

What’s his goal? “I’ve already gotten to do the things I want to, and continue to be creative and make a living at it. The idea of being a Seinfeld has never been my plan. I have gotten to write and perform in things I’ve proud of.”

Mystery Science Theater 3000, also known as MST3K, “was a dream,” he says. “I was obsessed with the show growing up. I had the poster on my wall, the VHS tapes.” 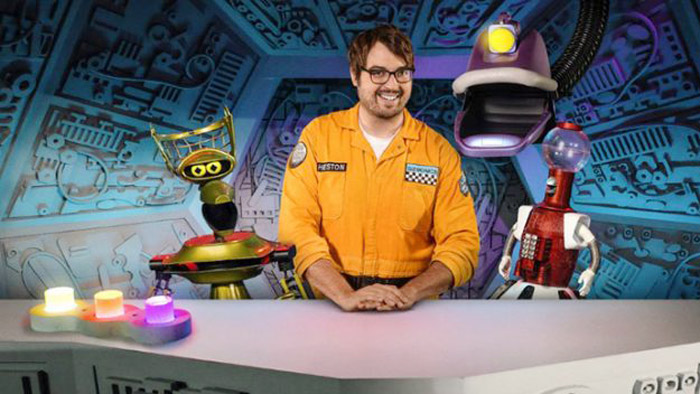 On the comedy circuit, Mr. Ray met and befriended MST3K creator Joel Hodgson, who invited the younger comic to do “something” with MST3K when he was bringing the revival back to TV in 2017.

“Yes! In any capacity, making coffee, I will be involved,” Mr. Ray recalls saying.

“You know what, you should be the guy,” Mr. Ray reports that Hodgson decided.

Mr. Ray continues, “It’s rare in anyone’s life to have a literal dream like that as a kid, and then for it to happen.”

Was it what he’d imagined?

“By then, I’d written on a bunch of shows, I knew the ins and outs of how to write and make comedy shows. This was so much more work than I ever thought it would be.

“The idea of the show is a guy and two robots being tortured by having to watch these B movies. They get through it by making jokes.

“But we really had to endure these movies. It was torture.”

Also, he says “It was a real master class in comedy writing. You have to have lots of kinds of jokes. It can’t be the same reference every time, and everything has to fit with the movie. I never dealt with comedy and spreadsheets like with that.”

One movie, Cry Wilderness, is about a boy who befriends Sasquatch and tries to defend his monster-friend’s forest against evil land developers.

“A lot of it was this out of focus nature footage, and the last four minutes was so bad. You’re so exhausted by so close to the end. The writers were all mad at each other, we turned against ourselves. It nearly broke us.”

They’ve not been renewed by Netflix, so what’s next for MST3K?

“We want to figure the best angle on how to proceed,” Mr. Ray says. Mr. Hodgson is currently on tour with a live version of the show. “Once he is done we’ll deal with it.”

He suggests a best “intro” episode of the show for newcomers is Mystery Science Theater 3000: The Movie, from 1996, a theatrical release skewering the film This Island Earth.

“I’ve done two standup records in my career, both named with lines from that movie.”

He says, with Social Media and all the streaming platforms, “There are so many voices out there. You go off and do your own thing and hopefully find an audience.

“There’s a lot to do, but not a lot of money in it. We’re like working class blue collar entertainers, trying to make a living at it.”

He says, “You don’t have to be a superstar. People think if you’re not famous, you’re not really successful. That’s not so, it’s not like, if you don’t know my name I’m not doing it. I still get paid. Of course, there’s no insurance or benefits.

“You do all these things: Last year I wrote a script for a pilot on the BBC, and I do stand-up, I acted in a movie that is going to be on Hulu in the spring. You’re spinning plates, hoping one of them, you’ll take to Antiques Roadshow and it’s worth something, and it will set you up for a year, or a half year.”

What else can we expect at the Park Theater?

“It’s stand-up storytelling, essentially,” Mr. Ray says. “I’m putting together a one hour show I plan to take to the Edinburgh Fringe Festival,” among the largest high-profile arts festivals in the world.

Mr. Ray says, “It’s about this crazy year I had, when my father passed away. Not exactly the starting point for comedy, but so many things I wound up doing that year in my life: I got Lasik surgery, zip lined for the first time, got a vasectomy. The year, it just felt so crazy. So it’s about that.”

What else? He suggests, “If you’re reading this right now and I didn’t seem too funny, don’t worry. I will make you laugh.”

Invited to add something funny, he says, “Write this: Asterisk-fart noise. The words ‘fart noise’ in writing: I think that’s funny.”

With apologies, then, readers:

Tickets to Comedy After Dark with Jonah Ray at the Park Theater in Glens Falls, Friday, Jan. 24, at 8 p.m., cost $22. On tap: Feature act, host and headliner Mr. Ray, with a cash bar.