Mayor Blais at Fenway: ‘Best day of my life’

“This is the highlight of my career,” Mayor Blais told The Chronicle on the field before the pitch. “I’m nervous as heck.”

Asked if he was going with high heat, he responded, “No, low lob.”

Was he on a pitch count?

Phil Morse, the Red Sox co-owner who has a home on Lake George and made his fortune in Glens Falls in the NAMIC medical device business that he founded, arranged for Mayor Blais to be honored.

With 48 years in office and counting, Mr. Blais is the longest serving mayor in New York State history, and current second-longest in the United States.

The mayor was supported in Boston by more than a hundred well-wishers from back in Lake George. Vinnie Crocitto from the Holiday Inn, and Eric Siy, Jeff Killeen and Chris Navitsky from the FUND for Lake George, among others, gathered pre-game behind the safety netting in seats behind the first-base line, cheering Mayor Blais on, joking and taking pictures. The sun was strong, the heat was on. Someone reminded the mayor to drink water.

First honor was for Mr. Blais to spray white paint through a cardboard form onto home plate. He told The Chronicle later that first-pitch honorees don’t typically get to participate in that ballpark ritual.

Last thing the mayor’s handler did before the first pitch was confirm his name — “Bob, not Robert” — into a shoulder mic. Then the Sox announced him to generous applause.

In the end, the mayor stood just in front of the mound and lofted the pitch toward home plate. It didn’t quite make it. Red Sox catcher Travis Lakins retrieved the ball on one hop and handed it back to the mayor.

He wore a Red Sox jersey emblazoned with “Blais” on the back, and the number 48, for his years as mayor. Mr. Blais said the jersey originally had the number 19, for 2019, but that Mr. Morse ordered a last-minute redo, for a shirt numbered 48.

Mr. Morse was in blue blazer and good shoes on the field hanging with Mayor Blais before the pitch. “The Yankees wouldn’t do this for him,” Mr. Morse told one of the gathered hometown onlookers.

Mayor Blais, a Boston University grad and former basketball standout, is a lifelong Red Sox fan. He recalled working at Fenway as a BU athlete on scholarship, cleaning locker rooms, among other jobs.

In Ted Williams’s final season, Mayor Blais said, “one of our jobs was to raise the flags over the stadium.”

Mr. Blais said that on days when Williams was in the starting line-up, they’d raise the state flag to the top of its pole. But if he wasn’t, Mr. Blais said they’d keep the flag just shy of full-up, a signal to their friends back in the dorms that Williams wasn’t playing that day.

“That way, they could save their two dollars that it cost to get in. Everyone just wanted to see Williams play.”

After the first pitch, the mayor was escorted off the field. Mr. Morse led Mr. Blais to a freight elevator in the Green Monster and took it to reach the mayor’s seats very high up in the stands.

He and the entourage of about 30 who’d accompanied him from Lake George sat just to the left of the left-field foul pole, under the “L” in a new Coca Cola section adjacent to the park’s famed Green Monster. 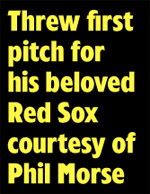 “Phil spent an hour-and-a-half with me,” Mr. Blais says. “He couldn’t have been nicer.”

The night before, about 60 of Mr. Blais’s friends and supporters from home and elsewhere attended a pre-First Pitch party at the Crowne Plaza hotel in Newton, just outside town. “It was very nice,” the mayor reported. “They treated us well there.”

As for the ballgame, the Sox fell behind Baltimore, 6-0, but ended up blowing out the Orioles, 13-7. (When we texted the early 6-0 score to Chronicle editor and Baltimore fan Mark Frost, he texted back: “Sox only 6 down. For Sox vs. Orioles that’s like being tied.”) Red Sox third baseman Rafael Devers had four RBI to surpass the 100-mark for the season.

Mayor Blais said their car was parked alongside players’ cars under the stadium. On their way out after the game, he said the police officer on duty asked if he was the Lake George mayor who’d thrown out the first pitch. When Mr. Blais said yes, the officer said, “My wife and I got married in Lake George 25 years ago.”

The policeman then had the officer outside stop traffic on jam-packed Boylston Street and let the mayor’s car through.

“Right to the end…they treated me so well,” said the mayor. “I was almost in tears. It was the greatest day of my life.”

Cathy DeDe adds: Fenway showed itself a model for customer relations and visitor experience. Nearly to a person — the on-field “ambassadors” who guided Mayor Blais through his First Pitch experience (and helped us out-of-town journalists get our shots and stories), the servers in the stands, the ushers who helped two Chronicle photographers navigate from seats down by the Sox dugout all the way up to Mayor Blais’s location, the on-field coach who tossed foul balls to kids in the stands, a young staffer in the gift shop, even those in the rest rooms — all were friendly, accommodating and personable.

Share
Previous Our August 22 issue
Next Wynton Marsalis at SPAC & Double H; what it means to our writer Pat