The book’s release is timed to coincide with the 70th anniversary of the end of World War II, Mr. Rozell told The Chronicle.

It’s the first of three planned books stemming from his ongoing 14-year award-winning project to preserve memories of local World War II veterans. He and his students have done more than 200 interviews, all of them videotaped and transcribed. 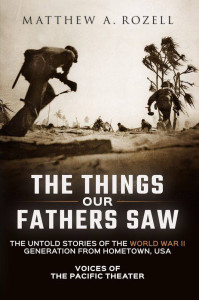 Among the veterans featured in the book are Dan Orsini of South Glens Falls, Gerald “Barney” Ross of Whitehall, Joe Fiore and Bob Addison of Glens Falls, Andy Doty and John Leary of Hudson Falls, Joe Minder of North Creek and Gerry West of Fort Ann.

His veterans interview project uncovered the tale of U.S. Army soldiers who in 1945 rescued a train filled with Jewish families who survived the Bergen-Belsen concentration camp but were being transported to be killed elsewhere.

The previously untold story led to emotional reunions of Holocaust survivors who were on the train and their U.S. rescuers.

Mr. Rozell, a United States Holocaust Memorial Museum Teacher Fellow, is a recipient of the 2012 National Society of the Daughters of the American Revolution Mary S. Lockwood Medal for Education, and the 2010 Organization of American Historians’ Tachau Teacher of the Year.

Share
Previous Chris Ruckert, who lost 193 pounds to join Marines, is glad to be a Private
Next Ed Moore: Civic Center ‘getting $4.2-million from NY State’