“It’s been a wild ride,” says Mark Scialabbra, the 1998 Queensbury High School graduate who is Director of Player Development for the Washington Nationals, who are now playing the Houston Astros in the World Series. 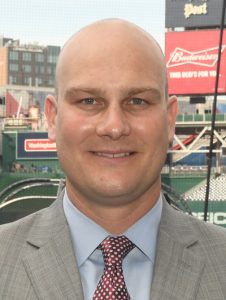 “It’s pretty amazing what the players have accomplished. They are playing for one another. It’s a testament to their talent and leadership. And it’s been fun to watch.”

Scialabba spoke to The Chronicle Monday night from Washington. He was flying to Houston the next morning for Game 1 of the World Series.

After graduating from Williams College and earning a masters degree in sports management from UMass-Amherst, Scialabba joined the Nationals in 2006 as an intern and worked his way up.

Before this year, the Nationals made the playoffs four times between 2012 and 2017, but lost in the first round every year.

This season, a year after star Bryce Harper left as a free agent for Philadelphia, the Nationals were floundering in late May with a 19-31 record.

“We were swept by the Mets in New York,” Scialabba said, “and I remember being on the train on the way home. We were looking for a solution and how we could mprove, but no one was pointing fingers. It was all positive.

“And then we got healthy, got some players back, and things started to gel. This is a resilient group.”

He says the Nationals are made up of three groups of players.

“We’ve got veterans like Howie Kendrick and Anibal Sanchez and Gerardo Parra, who are loose and helping the team learn to have fun.

“Then there’s the young guys like Juan Soto and Victor Robles, who come with such energy and ability that the older players feed off of.

“And then there are the superstars like Stephen Strasburg and Anthony Rendon, who keep the line moving.

“It’s a great mix, and when things have gone bad, there has been no finger pointing. Last year we had some of that in the clubhouse, and we had to make a change. But this team is very positive and has bought into what [Manager] Dave Martinez preaches, which is, ‘Let’s go 1-0 every day.”

Did Scialabba watch pressure-packed Game 6 of the American League Championship series between the New York Yankees and the Astros?

“I watched every inning, and it’s funny. I was sitting there watching in the ninth inning and D.J. Lemahieu was coming up, and I told my wife Meredith, ‘He’s one of the best hitters in baseball. He could drive the ball here.’”

Sure enough, Lemahieu hit a two-run home run to tie the game, leading to Houston’s Jose Altuve’s walk-off blast in the bottom of the ninth inning.

“Houston is a great club and Altuve is an unbelievable player,” Scialabba said. “He’s so talented and has overcome so much adversity. He’s a strong hitter who can hit it out on any pitch. You have to be careful where you pitch him.”

Can the underdog Nationals win?

“Certainly,” Scialabba said immediately. “It’s going to be a competitive series. Our pitching allows us to have a chance, but in the playoffs, and especially in the World Series, there is very little margin for error.

“They are a great club. They do it all. But we’ve played tough down the stretch, and we’ve really hit our peak at the right time.”

He said, “We’ve always had the talent to get to the World Series, but there was always something that didn’t go our way. But this year we caught a break when Juan Soto’s hit in the wild card game rolled under the fielder’s glove and three runs scored.

“And then we beat a phenomenal Dodgers team, and winning that series allowed us to gain some confidence. We continued to play well against St. Louis, and here we are.

“This is the year we can do it. We’re peaking at the right time, we’re confident and loose. You don’t want to be tense and tight at this time of year. I’m just so happy for everyone. I’m happy for the ownership group, the Lerner family, and for our general manager Mike Rizzo. He built this roster with the help of our scouts and our player development people.

“We’ve had many teams that easily could have gotten this far. I’m just going to enjoy it. I’ll be a little anxious, I’m sure. But this is going to be fun.