In separate conversations in the past week-and-a-half, one friend told me that he thinks President Trump will end up resigning and another friend predicted that Trump will win re-election. 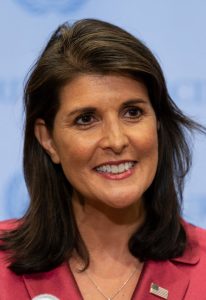 I don’t dismiss lightly the second friend’s opinion because he was a Trump believer I ridiculed for months in 2016 because I was absolutely certain there was no way he could possibly win.

Anyone who thinks the outcome is certain is probably guilty of wishful thinking.

You see my wishful thinking in the two photos atop the start of this column on the front page. I wish the 2020 Presidential candidates would be Elizabeth Warren for the Democrats and Nikki Haley for the Republicans.

Another friend of mine, when I asked whom he wants for President, said, “We can’t have four more years of this.” But then he said, “I watch the debates, but so far I’m not sold on anybody there.”

The Hard Left is having its day in the Democratic Party. They’re endorsing Medicare for all, forgiving of all student loans, turning college free, even trading capitalism for socialism.

For them, Joe Biden as the nominee won’t cut it. He’s too tied to past crime crackdowns and dubious wars. In their view, Trump and the whole Republican Party are in such disrepute that if ever there’s a time to press your whole agenda without compromise, this is it. Plus, they don’t see moderation as a winning hand anyway.

Then there’s the matter of Joe’s being 76 years old and perhaps faltering. Bernie Sanders is 78, just had a heart attack and is an avowed socialist.

During Tuesday’s debate he promised a job to everyone who loses one due to automation. Such blank-check declarations are nectar to the young, but may give pause even to many Democrats over 40. 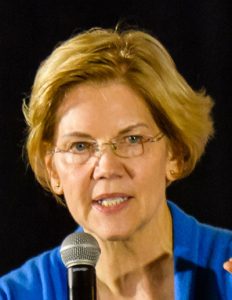 As to Elizabeth Warren, she is a mere 70! She’s on top of her game. And unlike Biden and Sanders who had a huge head start in name recognition having run previously, she built this campaign from scratch and earned her top-tier status. Right now I consider her the favorite to be the Democratic nominee.

Now match Elizabeth up with Nikki Haley, the former South Carolina governor who served as Trump’s ambassador to the United Nations. She did a strong job there, gave some hawkish speeches, built foreign policy credibility — and then she opted out, on her own terms, before the Trump house teeters to full crash-down, with nary a word of denunciation by Trump whose m.o. is to bad-mouth everyone he’s done with or who’s done with him.

If the race came down to Warren vs. Haley, we could be pretty certain of one thing: The U.S. would elect its first woman President, which in itself would be a breakthrough and breath of fresh air. It’s the kind of transforming event that we need to deliver us from the hate, muck and hopelessness that we’re mired in now.

Instead of some political insiders anointing the first woman President, it’s the voters who would decide.

Warren vs. Haley would give America a clear, definitive choice. They are philosophical opposites. Haley is an emphatic conservative, but she’s smart, disciplined and not nasty. She’s an immigrant’s daughter. In fact, both her parents are Sikhs who emigrated to America from India. Imagine the new energy she’d bring to Republican outreach to minorities.

Elizabeth Warren is just as formidable and fierce a liberal as Haley is conservative. A real choice. Let the populace decide which way it wants to go. Maybe, hopefully, most people would actually abide by the outcome.

So, how, given how small, selfish and nasty Donald Trump is, could he possibly win re-election?

Well, even if the House votes to impeach, it’s thought the Republican majority is his firewall in the Senate. But if it comes down to the GOP playing that card, the view of the left is that Democrats win either way. If the Republican Senate votes to convict, Trump is ousted. (Then they can start on Pence.) If the Senate balks, the left thinks the nation will be so enraged that Senate (as well as House) Republican candidates will go down in flames.

The result? The Democrats score a hat-trick: control of the Presidency, the Senate, the House, the full monty they had at the start of the Obama administration. This time the Hard Left won’t let them squander it.

So what’s flawed in this picture? Well, where America’s voters stand now and will stand in November 2020 is considerably less assured. Isn’t it a little telling that the Democrats in the House still haven’t actually voted to pursue the impeachment proceeding. Could it be that a whole lot of their members aren’t sure how this will all play out and so they don’t want their vote on record?

As noxious a person as Donald Trump is, he’s also got tremendous gut instinct and a sense of where a considerable swath of public opinion resides.

There is so much sentiment on the Democratic left that emphasizes how the U.S. falls short, how racist, how sexist, how homophobic, how anti-immigrant we are.

In a race between candidates who depict our country as “America the Terrible” vs. “America the Great,” there’s still a lot of hay to be made betting on the Great, especially in the several states that swing the electoral vote.