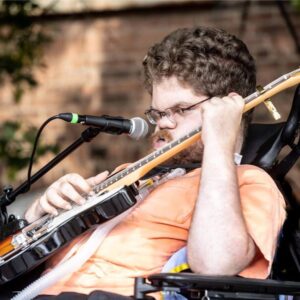 Lucas Garrett graduated from Glens Falls Hall in 2011, went to SUNY Adirondack for Science and earned his Bachelor’s degree in applied mathematics from SUNY Empire in 2017 — but music is his passion and his career.

He has his solo debut at Caffe Lena, the storied coffeehouse in Saratoga Springs, tonight, Thursday, Dec. 1.

The 7 p.m. show is a release party for Reaching Through Dreams, Lucas’ latest album, what he describes as a very personal collection of six original songs. (Tix: $16, $8 child; info: caffelena.org.)

‘No one knows how it works’

It so happens Lucas has Pompe disease. The ventilator and wheelchair he depends on are part of the picture, not the definition of it, although it has informed his work in unique musical ways.

Growing up, Lucas says, “Like any kid, I was all over the place, into something new every day. Then, I heard my dad playing the White Album by the Beatles when I was really little, about 7, and I was like, What the hell am I hearing? I was instantly into it.”

Reaching Through Dreams has a sound reminiscent of 70s concept artists Peter Gabriel or David Byrne. Lucas’ unique baritone voice has an ethereal quality, high on the outside edge. His songs are both complex and catchy.

“I never took vocal lessons,” Lucas says, “but I sing practically every day.”

“Absolutely no one including myself knows how the hell I’m singing on a ventilator,” he says. “Even my doctor asks, how do you do it?

“The long answer is, I breathe with the ventilator in a way that incorporates the muscles.”

He’s in a wheelchair, but he’s not paralyzed, Lucas notes. “The only difference between me and a typical person is, my muscles don’t work as well. But they do work.”

“When I was young, I was a lot weaker than I am now. When people say, they’ve never seen anyone play the guitar quite like I do,” he says, “I had to learn a lot of different patterns. I didn’t have the strength to go up and down the neck. In that sense, my weakness at the time informed my playing.

“Now I’m older, stronger and healthier. I can play the way the guitar is usually played.”

The modifications he developed are “not unprecedented,” Lucas says, but more common to jazz players. He calls his guitar style “the best of both: Conventionality, and some unconventionalness.”

“Even though I have a math and science background,” and opportunity to pursue a related career, he says, “I know what I need to be doing. It just feels right to be doing music. At the end of the day you have to do the career that is meaningful to you.”

Today, he says, “All the income I make is from music making or music activities,” including teaching guitar and writing about music for Nippertown, the online Capital Region music site.

‘Music is an equalizer’

“Music is an equalizer,” Lucas says. “People see me with a guitar in my hand, they take me a lot more seriously than they do if they just see me out and about.”

That’s both fortunate and unfortunate, he says.

“Stereotypes are lazy. Speaking just from my experience,” he says he sees less “ableism” from younger people than older — maybe a sign the world is changing.

And, he says, “When it comes to music, I see the least ableism. They don’t care what your problem is. They just want to make some music. There are lots of other messed up things in the music industry, but looking at me as an equal, it’s nice to have that.”

“I don’t like to pigeonhole myself,” Lucas says of his sound. “Overall, I call it alternative rock. It’s broad, allows me to do whatever I want.”

“Influences,” he says: “I started with the Beatles. Cat Stevens, Jethro Tull, Peter Gabriel, Jack White of the White Stripes. I listen to a lot of different things, all the way back to 1500s Celtic music.”

He appreciates local musicians he’s worked with citing, among others, Girl Blue and Candy Ambulance — longtime collaborators he played with earlier this fall at the Park Theater in Glens Falls.

“I’m thankful to be part of a great community of musicians,” he says. “Now to be playing Caffe Lena as a headliner….”

His Lucas Garrett Band members are Kevin Kosach on bass, Madison Lewis on vocals, and rotating drummers — Sam Zucchini for the Lena gig.

Reaching Through Dreams had its start in August 2020, “when the pandemic was at its worst,” Lucas says. “I thought I was done with music. We had so much going and then, like so many of my friends, lost it all overnight. I was a guitar teacher, performing out and working at various studios. I had all this money coming in,  and it all went away overnight. I sat down and wrote the first song, ‘So Many Times.’ It’s really a story about anxiety.”

“As the world started opening, slowly, I found it again.”

“At the same time someone came into my life that changed how I view love. I’m not old, but when you are 29 and someone changes your entire view on what love is — a lot of songs on the album deal with that as well,” he says.

“The first lyric on the album is ‘I’m going crazy, what is under my bed?’ The last lyric of the last song is ‘You lay your head on my shoulder of stone, it turns into clouds.’ I think that’s very indicative of what the album is about.”