Living with Parkinson’s: Lots of meds, lots of patience

By Gordon Woodworth, Chronicle News Editor
Donna Schempp has a very personal reason for participating in …

Donna Schempp has a very personal reason for participating in the April 29 Fox Trot for Parkinson’s Research run/walk in South GlensFalls.

She was diagnosed with Parkinson’s Disease in October 2010. “And it took two years to get a diagnosis,” she said.

The married South Glens Falls mother of three and grandmother of four has always been active. She taught aerobics for 10 years. She’s worked part-time at Watkins Garden Center for years. She was a popular hairdresser.

But in 2008, she started noticing subtle changes.

“The first thing was my gait,” she said. “I started walking funny. People would ask me if I was okay. And I had a balance issue. When I went to concerts in the park down by the river, I would stand with my feet apart. And when someone would come to give me a hug, I would fall into them. 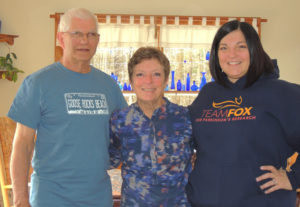 She had difficulty sleeping, and was unusually fatigued.

She went to an orthopedic surgeon, who did x-rays and gave her a lace-up brace and physical therapy. Things didn’t improve.

She said an Albany orthopedist put her in orthotic inserts, suggested more physical therapy, and then did reconstructive surgery on her foot on Jan. 4, 2010. “Fourteen weeks in a non-weight-bearing cast, then a walking cast, then a boot,” she said.

Mrs. Schempp said she lost her sense of smell, and her handwriting became small and cramped and unreadable. She was constipated.

“I didn’t know those were symptoms of Parkinson’s,” she said. “And I was still limping around.

“I’d walk by a window at Watkins and see myself, and I was stooping. And neither my husband Bill nor me realized it, but I lost my right arm swing.”

“I love that man,” Mrs. Schempp said. “He was like a bulldog. He had bloodwork done, did some tests on my legs, and sent me to Dr. Eric Molho at the Movement Disorder Center at Albany Med.”

She said Dr. Molho, a neurologist, immediately saw a telltale sign: She never blinked during their 30-minute meeting.

Dr. Molho made the diagnosis that day.

“I don’t have tremors, and I’m so glad,” she said. “I don’t want my granddaughters to be afraid of me. I do get frozen. They call it an ‘off’ period. You’re on all sorts of medicine, and all of a sudden the Parkinson’s takes over and you shut down.”

The National Institutes of Health estimates 60,000 Americans are diagnosed with Parkinson’s each year. The Parkinson’s Disease Foundation says a million people live with the disease in the United States.

Still, “when I get up at night to go to the bathroom, I have to hang on to all of the furniture.”

Mrs. Schempp terms her husband “a saint. He never once has raised his voice to me. Not once.”

In September, they’ll be married 44 years. “For better and for worse, in sickness and in health,” says Mrs. Schempp.

“I have a few good weeks and then it won’t be so good,” she said. “A new one [impact] is anxiety. That’s the worst. And it comes on for no reason. I also get what we call a ‘Jimmy leg’ [named] after the Seinfeld episode. And balance is a big issue.

“I see the doctor every four months. Now the big issue is backpedaling. I will be standing still and then start backpedaling, and down I go. Bill has caught me many times.”

She said her brain “doesn’t produce enough dopamine, and you need to take something to replace it. And the drugs you take bring on other symptoms, and you need pills for that.”

‘I’m better off than some’

“I get down and then I realize I have it so much better than others,” Mrs. Schempp said. “My meds cause dyskinesia, where you keep moving and twitching and shifting. That’s not the disease, that’s the medicine.”

She plans to walk in the 5K at the April 29 Fox Trot for Parkinson’s Research in South Glens Falls that her daughter Megan Pliscofsky created. She raised more than $20,000 last year.

Ms. Pliscofsky has raised more than $100,000 altogether for the Michael J. Fox Foundation for Parkinson’s Research.

Her own race, April 29 at the Betar Byway in South Glens Falls, includes a 10K that will go by the Schempps’ home.

Mrs. Schempp still gets her 8-year-old granddaughter Lucy on the bus every morning and is there to greet her every afternoon. She calls Lucy “an old soul,” who has raised more than $4,000 with lemonade stands and apple cider stands in the neighborhood for the Parkinson’s cause.