Citing the arrival of such threats as Harmful Algal Blooms and the tree-killing Hemlock Woolly Adelgid, the Lake George Association and the
FUND for Lake George said they will merge into a single entity that will keep the LGA name. 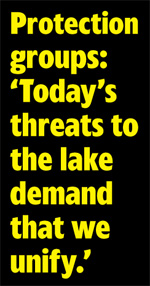 “One voice, one strategy, one constellation of assets [combined] into one organization totally focused on Lake George water quality.”

FUND board chair Jeff Killeen, 67, will chair the board. LGA board chair Peter Menzies, 50, will become vice-chair.

Listing rising perils to Lake George’s water quality, Mr. Siy said, “Unless we
come together fist in glove to face the challenges together, we’re in trouble.” He said the merged organization will be “just like fusion energy,” able to
generate power that “wouldn’t otherwise be possible.”

Mr. Killeen said, “This notion of creating critical mass — this merger allows us to do this. We are better able to protect the lake and communicate to the
basin. We will have an expertise that will be unmatched in the freshwater conservation base.”

The boards unanimously back the merger, the officials said. The formal vote was set for Tuesday. Mr. Menzies said they aim for the merger to take effect “hopefully soon, perhaps late April, May.”

Finances were said not to be a factor in the merger.

Mr. Siy says the FUND operates with an annual budget of “around $2-million.”

Both organizations own their headquarters buildings free and clear. They said they plan to unify under one roof, but that it’s not clear yet which building they will choose, or if they will locate elsewhere.

The Chronicle asked if jobs will be lost.

Mr. Lender said, “We are looking at our organizational structure and will have to make decisions based on that. Generally though we are looking to grow the size of this organization. Everything is a work in progress.”

Both entities have endowments. “We will open up with a very strong financial position,” said Mr. Killeen. He said the FUND has $8-million in its investment portfolio.

Mr. Lender said the LGA has “$4-million in our Second Century reserve” established “a couple decades ago.”

Both organizations said they fared well in fund-raising despite the pandemic, crediting “generous supporters” even as the LGA’s annual gala had to be cancelled.

Mr. Killeen said the unified organization, combining the FUND’s Jefferson Project research capability and the Lake George Waterkeeper with the LGA’s education programs and community outreach, “will have an expertise that will be unmatched in the freshwater conservation base.”

Mr. Siy said, “So much of what we’ve done has been through partnerships — on road salt, etc. This represents a new partnership, all focused on the future of Lake George. This is history and the future in the making. That’s what so exciting to me.”

Mr. Killeen said, “This whole notion of oneness and unity — the time is just right.” He said, “We will be able to be really efficient with our capital, and be able to say to our donors who say ‘I’m confused; who should I give to?’

“This is a moment of clarity that we expect everyone in the basin to rally behind. And we’ll be able to say to donors we can surgically apply your gifts. That will be received with great enthusiasm.”

FUND grew out of the LGA; then they were long at odds

The FUND began in 1980, as part of the LGA. It was initially the LGA Fund, but as the Fund asserted independence, the LGA insisted it no longer use its name. It became the FUND for Lake George.

There was some lingering bitterness, but talks to reunite have been on-again, off-again for years.

“We started to talk again in earnest at the end of the summer,” LGA board
chair Peter Menzies told The Chronicle.

“The coincidence is uncanny.

“Jeff [FUND board chair Jeff Killeen] and I were siting on his porch in November when the first algal bloom was occurring. It demonstrates to me that the time is now.

“I knew this had to happen. The timing was just perfect. We had been
through the motions before and that got us to the point where we knew there was no other good alternative.”

Mr. Killeen agreed. “Today’s threats to the lake demand that we unify.”