Friday and Saturday, Fort William Henry president Sam Luciano will drive to Albany to pick up men in recovery at Father Peter Young’s addiction treatment halfway house. He’ll bring them to the Lake George resort to clean hotel rooms, and then drive them home. 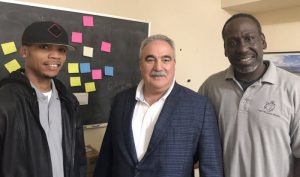 He did the same thing last weekend, when the hotel was fully booked. It’s sold out again this weekend. He’s squeezed.

“We lost 13 housekeepers when the international students on J-1 visas left,” Mr. Luciano told The Chronicle. “This summer, we had 32 housekeepers. Now we’re down to six.”

“We’ve tried everything, but we can’t find people to work,” he said. “The labor pool isn’t there. It’s a really big issue.”

So, as in years past, he called Father Young, whose Peter Young Housing, Industries and Treatment, Inc., provides addiction treatment, housing and vocational and employment services across the state.

“We have given them furniture and supported them in other ways. This relationship really grew through Mr. Flacke.

“We reached out to Father Young, and have used him for several years now. We will use them throughout the winter.”

Mr. Covington said he’s been sober for 14 years, and has lived in one of Father Young’s halfway houses for a month and a half.

“I love to work,” he said. “I work for a moving company also, but that slows down in the winter. I appreciate the opportunity to be able to work. However long they need me, I’ll be there.”

Mr. Govan also lives at the halfway house. “It’s a good opportunity, and they treat me well,” he said. “And Lake George is beautiful.”

Mr. Luciano said as tourism leaders focus on making Lake George more of a year-round destination, it needs a convention center, and “we have to start our own events, or bring them in from other places,” he said. “And we need employees. If we go year-round, we have to have a labor pool. And we have to be more than an employer these days. Here, we offer incentives and bonuses, and hold a Christmas party for the children of our employees every year, among other things.”