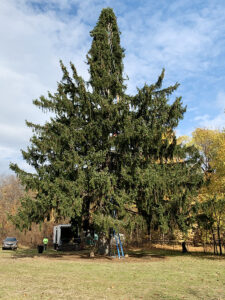 The Lebowitz family of Glens Falls has donated an 82-foot Norway spruce that will be used as the Christmas tree at famed Rockefeller Center in Manhattan this holiday.

The tree, at 35 Main Street in Queensbury east of Northway Exit 18, is 50 feet wide, weighs 14 tons and is believed to be about 85 to 90 years old, said Rockefeller Center publicist Rubenstein.

“Traditionally we’ve selected a Norway spruce in the later years of its life cycle, measuring at least 75 feet tall and 45 feet in diameter.

“If you have a Norway spruce you would like us to consider as the centerpiece for the historic Rockefeller Center tradition, we would love to hear from you.”

The tree — “dressed with more than 50,000 LED lights and topped with a Swarovski crystal star” — will be lit Nov. 30 in a live broadcast on NBC. 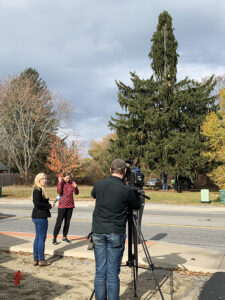 Glens Falls attorney Neil Lebowitz, speaking for the Lebowitz family, said he received a phone call out of the blue on behalf of Erik Pauze, the head gardener for Rockefeller Center, asking about the tree. “I had no idea what he was referring to,” but “he sent me a picture of the tree and I recognized the tree and the property right away.”

Neil said, “Erik happened to be in the area and spotted the tree as he drove by.”

“It’s a wow and it’s a once in a lifetime opportunity,” Neil said his family decided. “It helps make people happy, why not?”

Rockefeller Center said the spruce will later be “donated to Habitat for Humanity, milled, treated, and made into lumber that will be used for home building.”