Mr. Jacobs, the Queensbury entrepreneur and Olympic skier who passed away in April at the age of 87, was lauded as the driving force who made Cole’s Woods and the ski trails happen.

Scores of people attended the ceremony dedicating a plaque to Mr. Jacobs set on a boulder “under the towering pines,” as Bill Parks described it, at the “Four Corners” trail intersection east of the YMCA and Glens Falls Recreation Center ice rink.

Mr. Parks, a coach and retired teacher at Glens Falls High School, has been integral to the Cole’s Woods efforts since it began, and his talk at the dedication provided detail on Mr. Jacobs and how this city recreational haven came about.

“My relationship with Tom was invariably rewarding and fun. I miss that,” Mr. Parks said. He said that even if they were just going to the store on an errand, “he always made it fun.”

Mr. Parks expressed his satisfaction that Cole’s Woods and the groomed trail system will provide “fun and healthy exercise for families for many years to come.”

Contributions in Mr. Jacobs’s memory have poured into the group Friends of Cole’s Woods, which with the Jacobs family’s help purchased a spiffy new trail groomer that Bill Parks quipped “is so warm and toasty that I may wear a coat and tie. Unbelievable decadence. We have the Jacobs to thank for that.”

Bill Blood, the president of the Friends of Cole’s Woods group, which maintains the trails, told the crowd, “Our groomer will really enhance our quality of skiing in the woods. We hope the site will be even busier throughout the years.

“Tom and Dan sold the idea to the Common Council, exotic as it was,” Mr. Parks said. He said it became the first lighted municipally owned cross-country ski trail system in the nation.

Initially it was just a 2-kilometer route, Mr. Parks said, but when “a big chunk of Crandall Park disappeared in order to build Aviation Mall,” Mr. Jacobs and others “prodded the City of Glens Falls…to buy the rest of the woods and turn it into a preserve.”

Dr. David Thompson, who attended the dedication, called The Chronicle later to add some more detail.

He said the late law partners John Reardon and Robert LaPann owned the land and offered to sell it for $50,000.

Dr. Thompson said that a fund-drive was launched but stalled until Oliver Laakso, then chairman of Kamyr corporation, provided the remaining $40,000 needed.

By that point, Mr. Parks said, Doug Neely was the Glens Falls Recreation Superintendent and they set out to lay out new trails, which now encompassed some steep hills.

Mr. Parks said they aimed to make trails that were “thrilling and chilling,” although he said Mr. Neely also insisted on “short cuts to be taken by people who didn’t want thrills or chills.”

Mr. Parks said that with the additional land, the ski trail length was tripled into a 5 kilometer loop, plus side trails that extended it to 7 kilometers overall.

The trails hosted weekly ski races for locals and major competitions that Mr. Parks said drew skiers from the Canadian and U.S. national teams and Olympic stars from Norway, thanks to Mr. Jacobs’s national and international connections.

He also told of “Friday night fiascoes we would have for the local crazies, we among them much of the time,” complete with “lavish prize tables” for race winners.

Mr. Jacobs was also a pioneer in ski racing equipment. His Reliable Racing Supply and Inside Edge Ski & Bike Shop, nearby Cole’s Woods, continue nearby.

Mr. Parks credited Friends of Cole’s Woods for ongoing efforts in maintaining the trails and he praised in particular recent efforts of Jody Katz, Chris Freilinghaus and Bill Blood.

Amy Collins, Glens Falls’s tourism director, spoke of her own use of the trails growing up nearby. She said that Friday afternoon someone from Clifton Park phoned City Hall to ask if the ski trails were open.

Ms. Collins said that when she replied yes, the man said they’d be coming up that night to ski and then have dinner in Glens Falls, terming it “a perfect night out.” 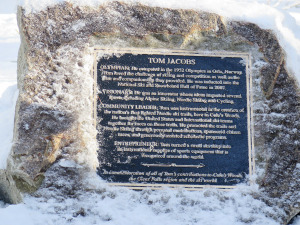 Ms. Collins said that she told the mayor: “See, recreation does lead to tourism.”

Queensbury Supervisor John Strough, who told The Chronicle later that he snowshoed on the trails earlier that morning, told the crowd that Glens Falls and Queensbury are one community and that Cole’s Woods is another feather in their cap.

Jeff Jacobs, one of Tom and Marilyn Jacobs’s two sons, said that while he now lives in Boise, Idaho, he credits Glens Falls with “providing a great foundation for my life,” with “healthy activity” and a nice environment, like Boise also offers.

John Jacobs, who now heads the family businesses, took the occasion to credit his mother Marilyn for forsaking her own teaching career and her Masters in French to support the family, the enterprises and the civic efforts.

Mrs. Jacobs said, “It’s been a wonderful life. I’ve never regretted for a minute moving here, even though Colorado has such great snow.”