By Gordon Woodworth, Chronicle News Editor
Eurasian watermilfoil is here to stay in Lake George, but …

Eurasian watermilfoil is here to stay in Lake George, but ramped-up eradication efforts appear to be slowing the spread of the fast-growing invasive. 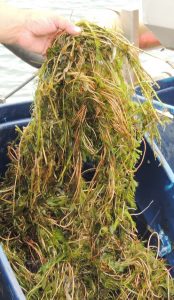 “The goal is to eliminate all dense beds by 2022,” Mr. Wick said. “Bay by bay,…great progress is being made now, faster than any other time since milfoil was managed for the first time in the late 1980s. There’s no doubt in my mind we can do it.”

Four three-man crews from AE Commercial Diving are on the lake five days a week through the end of September, using three suction harvesters to carve into the dense beds.

Previous efforts with heavy mats that smothered the plants on the lake bottom are no longer being used.

“We send the suction harvesters into the most dense areas and then send divers in to get the fragments,” Mr. Wick said. 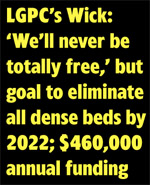 He said Warren County, through a state grant obtained by Chris Belden, contributes $200,000 a year. The Lake George Association and the Park Commission each contribute $100,000 annually. The FUND for Lake George kicks in $60,000 a year.

Milfoil was first discovered here in 1986, and more than $5-million has been spent since then on milfoil eradication efforts. Current funding “is the most money ever spent on milfoil on Lake George,” Mr. Wick said.

He said “in the 1990s and early 2000s, there were dozens of dense beds of milfoil and most were expanding throughout the lake. This number has been reduced to fewer than 15 known dense beds today, most of which are smaller than past beds.

“With the collective efforts of the Park Commission, the LGA and the FUND for Lake George working together over the past seven years, we have turned the tide on this expansion and have actually considerably reduced or eliminated many of the problem areas in the lake.

“We fully believe that, with the [annual] commitment of $460,000 we have for 2019-2021, we will have largely achieved that goal. We do occasionally find a new patch that needs to be addressed and diverts work on existing sites, but we are managing very well.”

Mr. Wick discovered a new patch himself while returning to the Million Dollar Beach boat launch after a day on the lake.

“It was a very dense, very large bed just to the east of the boat launch,” he said.

“It took me 15 minutes to get all of the milfoil fragments off of my boat. The next day, I redeployed three crews there, and they just finished yesterday. That bed was as dense as dense could be, and with the traffic there, with boats from the Rose Point Association going through there and chewing up the milfoil, we needed to get on top of that, and we did.”

New beds have also been discovered near Dog Beach, next to Million Dollar Beach, and in the Sagamore Green Island bridge channel just south of the Lake George Kayak Company. Crews were offshore at Dog Beach on Wednesday, July 17. 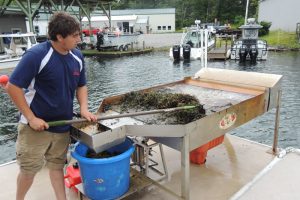 Atrau Roberts of AE Commercial Diving rakes milfoil from a sifter as a diver carefully hand-pulls the plants and roots near the Green Island docks for the Department of Environmental Conservation, the Warren County Sheriff’s Office and the Park Commission. The milfoil, known to be good mulch for gardens, is brought to the Bolton or Lake George transfer stations.

The patch near the Sagamore bridge, one of the busiest spots on the lake with four marinas nearby, will be monitored and likely tackled in September.

“Some of the perennial hot spots, Finkle Brook delta and Northwest Bay delta, are virtually milfoil-free,” he said. “We worked on them last fall, and again in early spring, and there has been almost no rebound.”

“We will never be totally free from milfoil, given the massive size of the lake and how prolific the plant grows. However, once we get ahead of it, we will have to spend considerably less than our current funding level to keep it at bay.”

He said showing the success stories, like Tea Island Bay and Gull Bay in Putnam, they can share the model statewide.

“Plus, it’s easier to get finding when you can show that you are eliminating beds,” he said.

Lake George Park Commission executive director Dave Wick updated the ongoing fight against Eurasion milfoil in an email to Ben Sheldon of AE Commercial Diving, who is overseeing a crew of 12 workers here through the end of September. Mr. Wick shared the email with The Chronicle.

“Ben, Thanks for meeting with me early this morning to review progress and plans for the next few weeks…As discussed, here are a few observations and recommendations for the rest of July into early August.

1. Northwest Bay looks great, almost no visible milfoil at the current time and has held up very well since your work in June. There is one remaining small patch 50 feet south of the green navigation buoy that should be addressed ASAP to maintain the progress up there. The other Northwest Bay site to the south looks very good as well, and I know that your crew is cleaning up the stragglers over the next day or two.

2. Finkle Brook also looks great…with very few plants overall, an amazing reduction. You noted that you will be working on the new patch out in deeper water, which is good. There are also two small modest patches in towards shore by the docks. If the crew can clean those up, this site might finally be under control for the first time in many years.

3. Warner Bay will need attention soon, particularly the west side. Modest growth from the pinch point on the north down to Castaway. No dense patches seem to remain, which is great. Just cleanup following previous years. Maybe a week’s time.

4. Dunham’s Bay has one modestly dense patch remaining on the west shore…This should be addressed sooner than later, as the plants are fairly large and will fragment soon. This bay has 98% less milfoil than a decade ago; we want to keep it that way.

6. Tea Island Bay – largely milfoil free for the first time in decades, ready for mat removal. Excellent. This is a site that we want to showcase that we can all-but-eliminate milfoil where it had taken over the area for many years.

7. Sunset Bay needs attention soon. The center-east side of the bay is modest regrowth, but the dense beds are gone.

8. Eichlerville Bay (two bays south of Sunset and east of Burgess Island) has one extremely dense patch approximately 50’ x 200’ that should be addressed after Sunset Bay. The patch is isolated with almost only sparse growth in the rest of the bay.

9. Gull Bay – the south patch has shown very little regrowth from efforts two years ago, and needs a very quick cleaning. The north patch has sprung back to about 30% of the original density and will need attention soon. We can make this a milfoil-free bay, I’m convinced of it.

10. Million Dollar Beach Launch – Thank you for quickly jumping on that dense site. It will make a massive difference in the volume of fragments coming out of boats on the launch. We will review in a few weeks to check regrowth.

12. English Brook delta – there was a ring of milfoil surrounding this delta in 2018. This year’s quick review revealed very little milfoil and a lot of native growth. Not sure why, but we will keep an eye on it.

13. Dog Beach – your crew just started there today [Wednesday, July 17] at my request…This site has moderate and dense growth for approximately 100 yards along the beach between the Steamboat and the concrete pier to the east. This site hasn’t been addressed since 2016 and is in need of work, particularly to keep the launch from being re-impacted in the future.

14. Cannon Point – Dense bed eliminated, your crew is cleaning up the stragglers, we will check back on it in September to see any regrowth.

15. Middleworth Bay south – not managed in a few years, the only milfoil that still remains is in the very southeast part of the bay in and around the docks. It is not a high priority as it hasn’t expanded, but could be eliminated with some effort.

16. Long Island/Speaker Heck – you have put a lot of effort into both of these sites for 2018 and 2019, and control is difficult due to rocky substrate. We will have better success at other locations, but will keep this on the docket for 2020 so they don’t get out of hand.

17. Elizabeth Island Channel – we found two moderately dense, relatively small patches on the southeast of the channel, where previous work…had been done. We should get into this channel in 2019 with one harvester to see if we can knock those beds out.

18. Echo Bay – Joe and I swam the length of the bay, on the north and south shores, and found almost no milfoil. We’ve had several calls from homeowners about us working to control the growth in this small bay, but we are simply not seeing it.

19. Clay Island (East of Huddle Bay) is one of the largest dense beds remaining in Lake George. West side of the island, about 50 feet out…halfway up the island, can’t miss it. We should prioritize it for at least one full cleaning in 2019, at least two harvesters for a week or more.

20. Sagamore bridge channel – you identified a new dense patch just south of the Lake George Kayak Company, which we agreed we will try to address in September. Full extent is unknown.

21. Huddle Bay – not yet reviewed, not managed for three years. Will review soon.

23. Green Island/DEC marine facility – milfoil is much reduced from previous years. Your crew working there…should have it cleared in a day or two.

24. Commission Point – south of Red Rock Bay is Commission Point, a day use area with several berthing spots. The small dense bed in that small bay is now a large dense bed that needs addressing. Smaller than Clay Island patch, but not by much. We should try for one cleaning this year.

25. The Mother Bunch Islands – we saw considerable fragments, large and small, on the south side of the Mother Bunch between Floating Battery and Hatchett. Origin of the plants is unknown. We will try to find out where it’s coming from.

My milfoil survey crews still have many smaller, previously identified areas to look at in 2019 to check their status. However, the priority sites at this stage are above. I will send a follow-up email next week to discuss moving one or two crews north, starting in August. Thanks to you and your crew for all of your hard work.”