Every year Len Romeo called Howard Lebowitz to see if he would sell him his Glens Falls Toyota dealership.

It was such a ritual, Howard recalls, that he’d tell Len, “Has it been a year already?”

Len says the conversation was always cordial. Both men have deep roots in the local car business. Len, best known locally for Carriage Traders used car business in South Glens Falls, also has a wholesale division “buying trade-ins that the dealers don’t want.” Glens Falls Toyota was one of those dealers.

“We just had a pretty good relationship. We were friendly,” says Len. Plus, “I knew he didn’t have any kids who were getting in the business.”

Meanwhile all four children of Len and his wife Kathy work in the ever-expanding Romeo automotive businesses, as do Len’s two sisters and his half-brother. In the Kingston area, the Romeo family since 1999 has added Chevrolet/Buick/GMC, Kia and Ford dealerships.

Howard, 66, took the reins of Glens Falls Toyota from his father Harold, who started out in 1959 as Pride Motors, a Plymouth dealership on Dix Avenue. He added Toyota and soon went Toyota exclusively.

“It was about a 20-second phone call,” says Howard. “He said, are you interested in selling? I said I might be interested. So we met at Kru coffee” in Saratoga.

Len, 63, says, “It was pretty simple. We sat there for about three hours and went over a bunch of stuff. At the end of the conversation we had a deal.”

Len adds, “To get a franchise in your own town and get the premiere franchise, I’m unbelievably blessed. I thank Howard for giving us the opportunity.”

Howard said, “Toyota is a fantastic franchise. They have cars, trucks and vans for everybody and every six months they have new models.”

The sale closed on Friday, July 31.

The extended Romeo family was on hand. Howard said he was impressed “to see all the energy of [Len’s children] Mike, Joe and everybody.”

“Len’s being from Glens Falls was a big factor,” Howard said. He said he hopes the new ownership will have “as close to the feeling we had” of operating the business.

Howard told of doing a local fund-raiser with SPCA executive director Cathy Cloutier, in which for a month the dealership donated $25 per vehicle sold and filled a truck in the showroom with people’s donations of dog food and paraphernalia.

“If you had a major auto group” owning the dealership, he said, “there would probably not be someone on site who could make that decision and they’d have to knock it upstairs to 17 different people.”

Why did Howard sell now?

“I’ve been doing the same thing for 43 years it blows my mind,” he said. “Basically I watched our parents’ generation — all my uncles and their businesses — they wanted to do their business into their 80s, my uncle Jack ’til he was 96 years old. I didn’t really see myself doing that.”

Howard said, “I’m looking forward to skiing in the winter or snowmobiling and going places when we can travel again…

“I’m just now really able to breathe. I love to travel. Every year I went on a motorcycle trip in Europe — Greece, Corsica, Sardinia, Croatia, Serbia — nine to 15 days, out of Slovenia. I go alone and would meet people from all over the world.”

He said what he’ll miss is “the people” — both the dealership staff and customers.

What he won’t miss, he said: “You go away at night but you’re still worrying about your business. If you don’t worry, I don’t know how you’re human.” 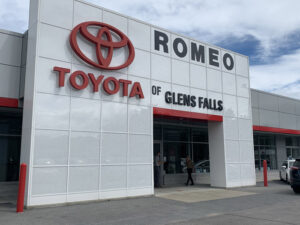 Len’s father Joe made the move from New Jersey to Glens Falls in the 1970’s. He bought Parsons Ford, renamed it Glen Ford and built on Quaker Road, where Nemer Ford and D’Ella Honda are now.

“He was a salesman at a Ford dealership in New Jersey,” Len said. “He saved up his money and bought his dealership.”

In the early 1980s — “whenever Carter was President — interest rates went to 18%.” Len said that when his father “started negotiating” to finance his construction on Quaker Road, “the interest rate was 6 1/2 percent,” but it was 21 percent by the time it came to close on the loan. “He actually went bankrupt, out of business.”

Their entry into the new car business came in Kingston. A wholesale client — a “70-year-old” Buick-Pontiac dealer — “wanted to sell. Jim and I drove down. He told us what he wanted for it. We bought it right on the spot.” One thing led to another and the Romeos family now has Romeo Chevrolet Buick GMC, Romeo Kia of Kingston and Romeo Ford of Kingston. They’re all managed by the Romeos’ son Joe.

Daughter Genese Romeo is Director of BDC — the Business Development Center — that handles everything from “Internet leads” to customer contact on service calls.

Sherrie Morse, controller at all the stores, has worked for the family for 25 years.

Lebowitz family still owns GF Toyota’s building; it once was the ‘circus lot’

Howard Lebowitz, in talking to The Chronicle about his sale of Glens Falls Toyota, detailed some history of the dealership’s building, which will continue to be owned by the Lebowitz family, which was represented at the closing by Howard’s attorney cousin Neil Lebowitz.

Howard said the building was “built on the circus lot” by the three Lebowitz brothers — “my father [Harold], Neil‘s father [Isadore but Howard adds “he was my uncle Itchy”] and Maisch [real name Maurice].”

[Mark notes: I was born in 1950. Ath the very outer reaches of my memory, I recall attending a circus on that lot.]

Howard said it was boarded up, covered with graffiti, “an eyesore,” for a long time. In 1999, he moved the Glens Falls Toyota dealership there from Dix Avenue, improving the structure in three “iterations.”

But “the footprint hasn’t changed,” said Howard. He said the back wall, side walls and roof remain the same. The front wall, now with metal cladding, was moved forward.

Howard said he developed a nearby one-acre lot on LaRose Street to accommodate “almost 100 spaces for employees and storage.”

The dealership’s new owners, the Romeos, will utilize that lot too.